From the Tanintharyi region in the south to Rakhine state in the west and Kachin state in the north, a number of ethnic conflicts have given rise to different displacement situations across Myanmar for many years. The country is also prone to disasters and suffers from many development challenges. Displacement dynamics are complex, and partners have often struggled to establish a clear and shared understanding of the phenomenon.

JIPS’ support in Myanmar began in 2013, when it supported the Camp Coordination and Camp Management (CCCM) Cluster and other partners in Kachin in refining and undertaking a longitudinal profiling exercise covering the situation in the state’s displacement camps between 2013 and 2015. Upon request of several partners, JIPS also conducted a scoping mission for a profiling exercise in the south-east.

JIPS was later asked in December 2015 to support a similar camp profiling exercise in and around Sittwe in Rakhine state that compared the situations of four population groups in the area.

Providing evidence on IDPs in Sittwe township, Rakhine State (2016 – 2017)
As members of the CCCM Cluster, the Danish Refugee Council (DRC) and UNHCR requested JIPS’ technical and coordination support in December 2015 for a profiling exercise focused on the displacement situation in and around Sittwe, the capital of Rakhine state, where ethnic violence had displaced more than 121,000 people since 2012. A number of assessments and data collection activities had previously been conducted, but their different methodologies made it difficult to compare the situation between camps and across sectors making prioritisation and other strategic decision-making very difficult.

With the aim of informing comprehensive responses and the pursuit of solutions by the government and its humanitarian and development partners, the profiling exercise examined the situations of four population groups:

JIPS supported the profiling exercise both on-site and remotely. It undertook a technical mission to Rakhine in May 2016, during which it worked with various humanitarian and development partners to identify the needs and feasibility of such an exercise. The technical working group was also set up to plan and implement the process, and JIPS supported its members in developing and agreeing on its objectives, scope and other methodological elements.

JIPS continued to support the working group remotely in finalising the methodology and tools for the exercise, and household survey data collection was completed in late 2016. It then undertook another mission in March 2017 in collaboration with Statistics Norway to support the analysis of the survey data and development of a qualitative data collection methodology to complement survey findings.

A half-day workshop was organised with the CCCM Cluster and the technical working group to map communication channels between humanitarian organisations and affected people and improve community participation in the profiling process, including in the analysis and validation phases.

JIPS continued to support the technical working group remotely after the mission in conducting an inter-sector analysis of the profiling results before feeding them back to the communities via a unique short film. 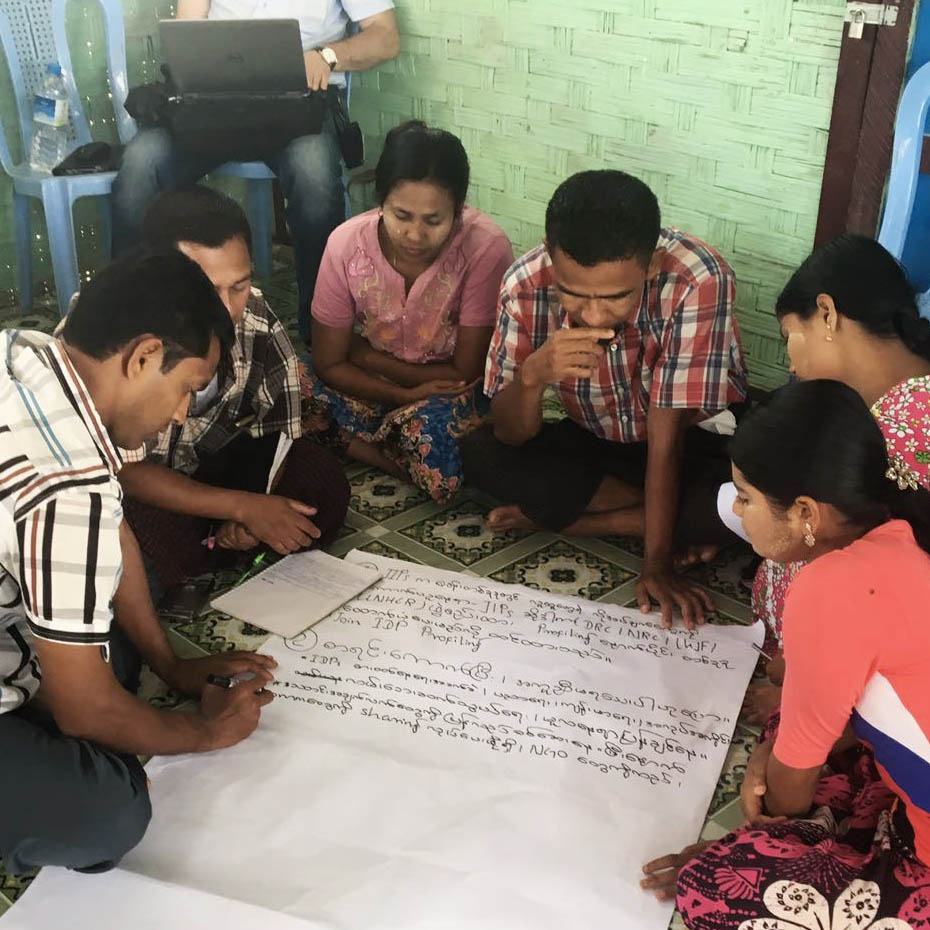 The Sittwe Camp Profiling Report was published in August 2017, and its findings were discussed in a series of analysis workshops with clusters, government bodies and other stakeholders. Each cluster developed concrete recommendations and ideas for future programmes based on the report’s findings.

Shortly after publication of the report, widespread violence against Muslim populations in Rakhine State broke out, forcing hundreds of thousands of people to flee across the border into Bangladesh. This had a significant impact on the planned use of the profiling results, however much of the information gathered continued to be useful to the humanitarian response in Bangladesh. This included data on population and household characteristics, on former camp structures as well as, data for return planning purposes.

The March 2017 community workshop in particular proved to be highly valuable. It showed that those affected by displacement had significant interest in understanding the profiling exercise and discussing how it could be used to improve their situation. Due to low literacy levels in the camps around Sittwe, it also led to the idea of producing a film on the findings for further dissemination amongst affected populations.

The outcome, a 15-minute video produced by and for IDPs and their hosts, provided them for the first time with comprehensive data on their own situation with the aim of empowering them to act on the evidence base. “This is something DRC has never done before in the camps, and not something I have seen other organisations do either”, said Sophie Everest, the CCCM coordinator in Rakhine and the focal point of the process.

Using video to engage with communities

The video was produced during a joint workshop in which staff from camps managed by DRC, NRC and the Lutheran World Federation (LWF) collaborated to create the storylines for each section of the film, which features roleplays and highlights key messages in an engaging and entertaining way.

Outreach workers organised screenings in the camps that were over-attended, so they also uploaded the film on their mobile phones and took it door to door. Some teashop owners also showed interest in playing the video on their TVs. Each screening was followed by a quiz to understand what community members had gleaned from the film and inform future communication initiatives. A Q&A session provided a space for open questions and reactions. The full profiling report was also translated into local languages, and various community feedback activities were planned.

JIPS plans to test and adjust the community participation methodology used in Rakhine in future profiling exercises in other situations. Other lessons learned include:

Analysing trends in displacement camps in Kachin & Northern Shan States (2013 – 2015)
Protracted conflict in Kachin state in north-east Myanmar has caused significant waves of displacement, during which people have fled to different areas across Kachin and on to neighbouring Shan state. Many IDPs took refuge in camps and camp-like settings dispersed across both government and non-government controlled areas.

The profiling process was initiated in 2013 and has been repeated regularly in 2014 – 2018 on a roughly annual basis. The main objectives are to:

JIPS undertook a mission to Kachin in 2013 that focussed on methodology and tool development, operational planning and training. It held a series of meetings with national and international humanitarian stakeholders, camp managers and other camp representatives to refine the profiling process and tools.

which enabled them to undertake subsequent profiling rounds themselves. Due to the relevance of the data produced, the camp profiling has successfully continued on a roughly annual basis recently completing its seventh round in 2018.

In 2015, based on the data collected in the first four rounds, JIPS collaborated with Statistics Norway and NORCAP to carry out a cross-camp and historical trends analysis to assess differences between the sites and how each situation changed over time. The aim of this work was to capitalise on the rich amount of data provided cumulatively in each individual snap-shot exercise. 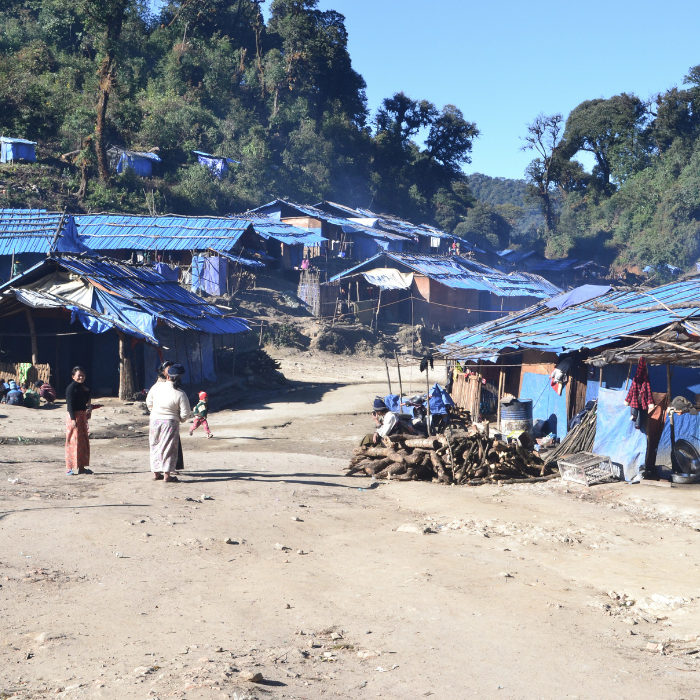 JIPS’ support led to the development of a comprehensive methodology, revised data collection tools and an operational plan to implement regular camp profiling exercises. Its emphasis on capacity building during its mission and the first profiling round empowered its local partners to run future exercises under their own initiative which they have successfully done for several years.

According to Edward Benson, the CCCM Cluster coordinator for Myanmar: “Profiling is now a well-established and embedded process. Where before there was barely any data available due to the difficult accessibility of the remote areas, now there is reliable, consistently collected and agreed-upon data.”

A report was published in January 2016, which provides an overview of the displacement situation in north-east Myanmar over time and highlights differences between camps in government and non-government controlled areas. It shows trends in the camps’ demographic composition and changes in terms of access to shelter, food, healthcare, education, and protection. It also provides an initial analysis of livelihoods and key gaps and priorities for responses.

Partners in the Shelter, NFI and CCCM clusters and their donors have used the report and final analysis for their planning and programming. The profiling data has also been made available through various channels, including individual camp reports and an openly accessible database on each one covered.

Assessing the viability of a profiling exercise in the south-east of Myanmar (2013)
Communities in south-east Myanmar have been affected by conflict and displacement for decades, and the dynamics are complex. Many families have been forced to move various times and for various reasons, while others have tried to return. With a number of ceasefires in place and peace processes moving forward, the changing situation on the ground in 2013 highlighted the need and opportunity for a more comprehensive analysis on which to base a coordinated response.

Following a request from NRC, UNICEF, DRC and UNHCR, JIPS undertook a scoping mission in April 2013 to assess the usefulness and feasibility of a profiling exercise in targeted states and regions. Through extensive bilateral discussions and field visits to Tanintharyi region and Kayah state, the need for such an undertaking became clear.

Given the politically delicate situation, access restrictions and a changing dynamics on the ground due to the various ongoing peace processes, a profiling exercise would not have been timely.

JIPS’ scoping mission helped to establish a roadmap and draft concept note for a profiling exercise for partners in Myanmar to build upon and take forward at a suitable time and remains available to support such a process in the future.