Most of the world’s displaced people – both refugees and IDPs – live in urban areas, where they form part of an expanding global majority. For governments and agencies working to address forced displacement, building useful, context-specific data and analysis in urban settings is crucial. “Effectively addressing displacement in urban areas requires a shared understanding of the systems, forces and actors shaping the complex urban environment. It also necessitates an analysis of the vulnerabilities and socioeconomic conditions of displacement-affected and host populations, their intentions and the factors shaping their integration.” (JIPS’ research publication on urban profiling practice)

Being highlighted as a particularly well-suited approach for analysing displacement in urban areas in a comprehensive manner, urban profiling is a “collaborative information-gathering process that provides disaggregated, comparative data about displacement situations” (JIPS’ Guidance for Profiling Urban Displacement Situations). It typically uses a spatial lens by looking at how places in a city are being affected differently; considers different communities, their needs and capacities; understands a city as a whole; considers change over time; and ensures a locally-owned process and results (GAUC’ Urban Profiling for Better Responses to Humanitarian Crises). 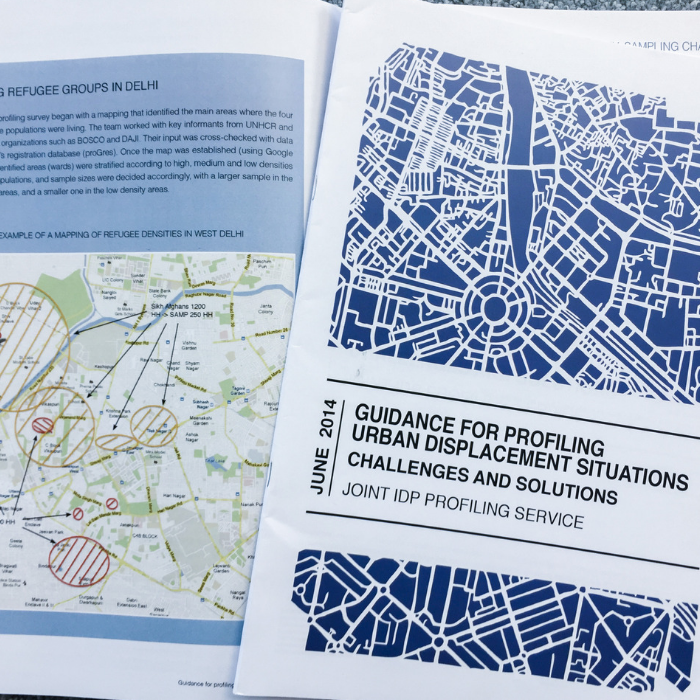 Developed in 2013-2014 through a collaboration between JIPS and the Feinstein International Center of Tufts University, the guidance builds on areas of complementary expertise and several jointly conducted case studies. It draws on the experience of working with government, humanitarian and development partners to profile urban displacement situations. Rather than a comprehensive guidance, it complements the step-by-step profiling approach (presented in other tools such as the JET) by highlighting specific urban issues and techniques for mitigating these challenges on the ground.

As part of the Global Alliance for Urban Crises and the Urban Analysis Network, JIPS helped update approaches to profiling in urban areas. Flagship outputs of these efforts include “Urban Profiling for Better Responses to Humanitarian Crises” as well as the related webinar.

In recent work with the UN Secretary-General’s High-Level Panel on Internal Displacement (UN-HLP), JIPS in collaboration with UN-Habitat and the International Institute for Environment and Development (IIED) also called attention to the specific challenges and opportunities that characterise urban displacement and response. The results from this work (see our joint submission, this roundtable report, and this briefing paper) fed extensively into the UN-HLP’s final report and recommendations.

In 2021, we furthermore conducted research on the use of urban profiling, and on the pathways that link it to global priorities for urban displacement response. The study titled “Working With Cities To Deliver Solutions For Displacement: What We Can Learn From Urban Profiling Practice” draws on key informant interviews with local authorities and development practitioners, as well as the experiences and lessons learnt from JIPS-supported profiling exercises (Erbil, Iraq; Mogadishu, Somalia; 21 cities in Syria; seven cities in Yemen, and five cities in Luhansk Oblast, Ukraine).

How are these efforts useful?

Urban settings, where IDPs and refugees live dispersed among the local population in remarkably complex environments, present specific challenges for practitioners involved in analysing them and responding to the situation.

Locating displaced persons, distinguishing them from other population groups, and identifying their specific needs and capacities are all particularly challenging and jeopardise our ability to understand displacement in urban areas and make informed response decision.

JIPS’ guidance on urban profiling, together with the Global Alliance’s knowledge product on the topic and JIPS’ research on good practices offer avenues to generate a shared, comprehensive and inclusive analysis of such situations.

The third and last session in this series was dedicated to internally displaced people (IDPs) in urban settings. As Cities Alliance writes in its dedicated blog article: “The experience of IDPs is often a protracted issue that needs both humanitarian and development interventions. With most IDPs migrating to urban areas, cities are at the forefront of the response. The webinar explored how cities and their partners – from both humanitarian and development side – are taking practical and policy-oriented actions to integrate their IDP populations.

The event was hosted by UN-Habitat and Cities Alliance, and featured JIPS’ Dr. Isis Nunez Ferrera alongside IDMC, IOM, UN-Habitat, the UN Secretariat of the High-level Panel on Internal Displacement, the city of Dhaka, and Oxford University’s Refugee Centre.

Watch this webinar conducted in November 2015, to better understand some of the basics of profiling of a displacement situation in urban contexts.