Since early 2019, JIPS has been supporting UN-Habitat’s Regional Office for Arab States (ROAS) in Yemen to implement urban profiling exercises and produce a sound and agreed-upon evidence base that can inform recovery and reconstruction efforts in the country. Having supported earlier profiling exercises in 2010 and 2014 (looking at the displacement context in the northern region, and focusing on the situation of Syrian refugees in urban areas respectively), this time around, our focus is on helping partners with i) the development of an urban profiling methodology and tools tailored to the displacement context in several cities in Yemen, and ii) the joint analysis of the data.

To kick off the joint analysis process, we co-organised a workshop and training for trainers with UN-Habitat and iMMAP in August 2019 in Amman (Jordan). The collaborative analysis of the data is a critical step in an urban profiling process. The workshop offered an opportunity not only to walk participants through each step of the process so to enable them to implement similar efforts with partners in-country, but also to discuss some of the key challenges that typically come up during this stage.

The urban profiling exercises in Yemen at a glance

In the past decade, Yemen has been facing a continuous humanitarian crisis with large scale displacement over the years. Initiated by the UN-Habitat’s ROAS office, the city profiling exercises initially focus on Aden and Sanaa, to understand how the conflict has affected both the functionality of the urban areas and the living conditions of the people who reside within them.

“With the results of this study we hope that local authorities will have something in their hands in order to build upon for the reconstruction of the country in the future.”
Riccardo Villa, Deputy Head of the Delegation of the European Union to Yemen (Source: UN-Habitat, Rapid City & Neighbourhood Profiling, Sept 2019)

Learn more about the urban profiling exercises in Yemen, and how it aims to contribute to building the country’s cities back better.

The 4-day workshop was designed as a training of trainers. It started out with a review of the underlying methodology to ensure all partners were on the same page as to how the data was collected, how to analyse it, and what it could and could not tell us due to the approach chosen. The focus of the workshop was then brought to how to plan and conduct joint analysis processes and ensure that its outcomes effectively inform city / neighbourhood action planning, empowering profiling partners to lead these efforts with local partners in the different cities in Yemen. It introduced the participants – colleagues from iMMAP and UN-Habitat – to the concept of joint analysis and walked them step-by-step through the process.

Focusing on areas is key for analysis as much as programming

As we highlighted to participants during the sessions on joint data analysis, many of the challenges we encountered in the urban profiling exercises in Yemen, are actually typical challenges in urban profiling, in particular: 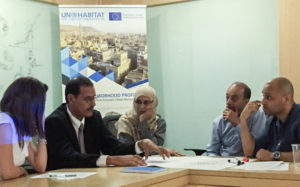 Importantly, to better understand how parts of a city might have been affected in different ways by a crisis, we need to understand its spatial divisions. This is a critical aspect not just for the joint analysis process but also for programming and development planning, to better inform and tailor actions to the needs of each area as well as those of the people living within them.

As a matter of fact, examining urban focus areas (UFA) and agreeing with profiling partners on the level of analysis (i.e. where to draw the boundaries for the purpose of data collection, analysis and use) is a critical step in a profiling that must come early on in the process. Different sources and methods can be used to help understand what these areas are, such as satellite imagery, road maps, infrastructure built by service providers, qualitative information, and context-specific knowledge contributed by partners.

“In the analysis we will try to go very deep into the datasets, for example what is the damage to the buildings, what is the accessibility to services, and how are people affected by that? What we’re trying to do during this workshop is to train our colleagues to give them the tools to lead the workshop discussion within Yemen.”
Ivan Thung, Urban Profiling Expert at UN-Habitat (source: UN-Habitat, Rapid City & Neighbourhood Profiling, Sept 2019)

An urban focus area (UFA) is an area within a city, sharing integrated urban morphology (spatial patterns and physical characteristics), as a result of how the city grew and expanded over time. UFAs are often drawn along recognizable boundaries such as main roads and rivers; and sometimes follow predefined administrative boundaries such as districts. While neighborhoods are often defined as the unit of analysis in an urban area, UFAs become more useful when working in larger urban centres.

During the workshop, we built on the urban focus areas that partners had agreed upon in the initial stages of the exercise, to map out how each urban pillar performed in each area of the city. This exercise is usually done by sector and together with relevant experts (such as on WASH, population dynamics, housing / land / property, etc.) within the different profiling partners. We used a fishbone diagram – a simple tool which has proven to be highly effective in our profiling work – to contextualise the preliminary findings and better understand the potential root causes and correlations. 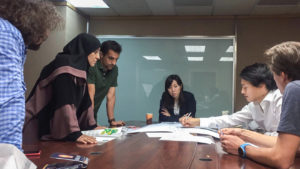 What we learned from recent urban profiling exercises

Our support to the urban profiling in Yemen builds on our ongoing collaboration in the Urban Analysis Network Syria (UrbAN-S), and specifically the urban toolkit that was developed under JIPS’ leadership.

One thing that we’ve learned from these and other recent urban profiling exercises: urban displacement requires the involvement from a wide range of relevant stakeholders, including not only government and local authorities, humanitarian and development actors, but also – and importantly – private sector service providers and urban experts involved in planning and programming. In addition, methods and approaches to delineate appropriate areas of analysis within urban areas need to be further explored in order to ensure that the ways on how citizens interact with urban systems are reflected correctly.

We will continue to work with partners in Yemen and other countries to further advance urban profiling practice, and share experiences and lessons learned with the wider community, including through the Global Alliance for Urban Crises.