From August 26-29, 2019, Urban Analysis Network Syria (UrbAN-S) consortium delivered its first four-day training centered on urban profiling. Developed by JIPS and delivered together with iMMAP and Common Space Initiative (CSI), the course aimed to help organisations responding to urban displacement in Syria, to improve their understanding of analysis in urban settings and the uses of the resulting shared evidence base (city profiles) for their initiatives.

—
Note: this article is adapted from a previous version published here, written jointly with iMMAP 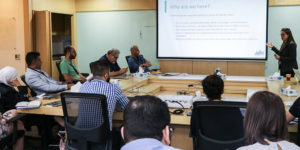 Why a training on Urban Profiling for Syria?

The devastating toll of the long-term conflict is clearly visible in cities across Syria, where both physical damage and the effects of displacement are concentrated. Effectively responding to displacement and informing urban recovery planning is a complex undertaking in such a context. It requires a good understanding of the population needs and their interconnectedness with sectoral challenges and the spatial context where these coincide (in this case the city and its neighborhoods). This is where urban profiling comes into play, as a process that links the analysis of conflict and displacement with that of places, including the levels of damage and the conditions of different sectors that render a city functional. The Urban Profiling Training introduced participants to the process.

Urban profiling is a collaborative process bringing together key stakeholders from various sectors in a city area, to jointly collect, analyze and use the resulting evidence to inform decisions and planning. The information is collected through qualitative and quantitative methods, and analysed using a holistic urban analysis framework to identify gaps between the needs of different population groups and the city’s capacity to provide for those needs.

Building on JIPS’ long-term experience delivering the Profiling Coordination Training, the training utilised a combination of short lectures and interactive exercises. This allowed participants to integrate concepts and work hands-on with practical tools to better understand what type of information and analysis is needed when programming and planning for recovery in a post-conflict urban setting. 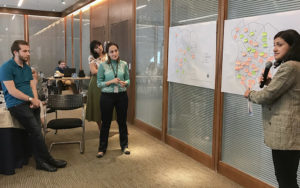 This required that participants first get familiar with the key concepts used in urban profiling. Some are borrowed from urban planning, others from conflict and displacement analysis, but together they help make data collection and analysis relevant to the current dynamics in Syrian cities, namely:

“Building robust data and analysis of a city in crisis is often a complex undertaking. It was great to see participants discuss key concepts such as urban analysis and dive deep into the practical exercises, including how to prioritise and contextualise relevant indicators, test area-based analysis and explore how to conduct joint analysis sessions. They all brought invaluable inputs from their own experience in Syria to contextualize the exercises and assess the opportunities and limitations of such approaches and tools. We look forward to seeing how participants apply this knowledge in their operations and contexts.“
– Isis Núñez Ferrera, JIPS Head of Field Support and Capacity Building, and Urban-S training facilitator.

To explore each of these concepts theoretically and practically, participants engaged in lectures and group work, including an exercise to learn different ways of modelling a city and the relevance of adopting an inter-sectoral approach; a half-day session to test area-based analysis and how to bring contextual information to interpret results using an example from a city in Syria; a series of exercises to plan and discuss the practicalities for joint analysis; and finally, an engaging discussion on how participants can use urban profiling in their organisations to achieve their strategic, operational, or programmatic goals in the context of Syria. 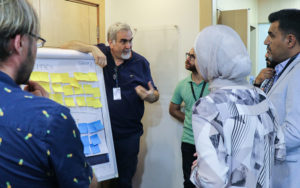 Common Space Initiative’s Dr. Omar Abdulaziz-Hallaj facilitating a discussion on how to model and make sense of complexity in a city in conflict.

“The sessions were very useful and well-structured, and the materials provided in the workshop were very informative. I was expecting to gain a deeper understanding of urban planning, and I did.” remarked a participant from COSV.

Another participant from HI noted: “The training was relevant, contextualized and had a logical flow. The trainers had relevant experience, which they applied very well to the workshop.” 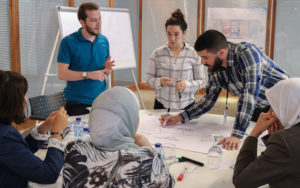 Participants and facilitators immersed in one of the workshop’s several group activities, facilitated by Mohamad Diab, from CSI.

Upcoming training events and next steps for JIPS

The UrbAN-S consortium plans to organise a second training later in 2019, that will be delivered entirely in Arabic and further refined building on the lessons learned from this first edition, to help promote the concept and practicality of urban profiling.

“The workshop went really well. It turned out to be a huge success, based on the really good post-evaluation feedback that we received at the end of the training. We’re conducting another training in Beirut in early December 2019.”
– Yara Halaseh, Technical Trainer for the UrbAN-S project

At JPS, we were delighted to see how well the Urban Profiling Training was received by participants with no background in urban analysis. Their positive feedback, in particular in regards to urban analysis and joint analysis as well as the methodology session, which was rather technical and demanding, was particularly encouraging. We look forward to continuing to strengthen these elements in our Profiling Coordination Training. We will also feed the lessons learned from UrbAN-Syria into our ongoing collaborations in the MENA region and share them with the wider community working on urban displacement including through the Global Alliance for Urban Crises and relevant events such as the upcoming World Urban Forum.

Funded by the European Union (EU), the Urban Analysis Network Syria (UrbAN-S) is a multi-year project bringing together iMMAP, JIPS, Mercy Corps/Humanitarian Access Team (HAT), Common Space Initiative (CSI), and the European Commission’s Joint Research Centre (JRC), aiming to contribute in different capacities to a high-standard urban analysis of the Syria crisis to enable effective planning and response. Coordinated by iMMAP, the consortium also seeks to ensure linkages and outreach with the wide array of Syria-focused global partners and stakeholders.

JIPS supported the project overall in an advisory and technical capacity, building on our extensive experience through profiling exercises in urban displacement situations. As part of this, we led the collaborative development of an Urban Profiling Toolkit tailored to the context of Syria’s cities, which involved organising and facilitating a number or workshop with UrbAN-S partners to jointly elaborate and contextualise the urban profiling methodology. In addition, we were responsible for the development of the Urban Profiling Training package, including designing training materials and sessions to fit local needs, as well as its first implementation.

We also work to feed experiences and lessons learned from the UrbAN-S project and other exercises into global discussions and frameworks, such as through the Global Alliance for Urban Crises.