Interview: Steph Matti about her experience in Sittwe (Rakhine) and elsewhere

We met Steph on a sunny autumn morning in a café in the middle of busy Rome. She is now working in the Italy office of UNHCR, but we have known her for a couple of years now. She participated in our Profiling Coordination Training in December 2014, and coordinated the Sittwe camp profiling exercise as its Profiling Coordinator between 2015 and 2017.

Steph has the diverse skillset of an experienced Profiling Coordinator: from ensuring the buy-in of key stakeholders, to working through massive datasets for cleaning and analysis, to generating a 180-page design file with maps, tables, and a variety of graphs – she stayed on top of all the steps throughout the process. We are thrilled that she will be discussing her strategies and experiences with us at the upcoming launch event of the new JET – JIPS Essential Toolkit on December 13th, 2017 (interested to join? Register now!). Read on for a flavour of her story. 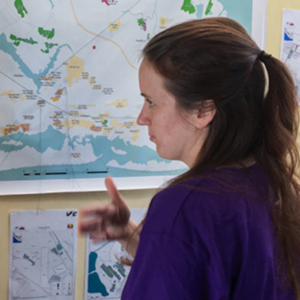 JIPS – Hi Steph! Thank you so much for granting this interview to us. So what did a typical day look like for you as a Profiling Coordinator in Myanmar?

Steph – There wasn’t a typical day as such, it really varied depending on what stage we were at in the profiling. Broadly speaking, you could break it down into three main phases: planning, data collection, and writing the report.

The typical day changes quite dramatically between these three phases: during the first phase, I spent a lot of time coordinating between the different humanitarian partners. That meant going from one meeting to the next, taking in a lot of information from different angles, and being on the ball and responsive in order to move the project along as quickly as possible. It was a fun time. I enjoyed the challenge of racing around, meeting new people and developing a strong grasp of a complex situation in a short period of time.

JIPS – Were all people open to the meetings?

Steph – Generally yes. In Myanmar, all in all people were receptive to the profiling exercise and the meetings we held about it. I think a large part of that was because JIPS had been there on mission a few months before I arrived to develop consensus about the aims of the profiling exercise. So the hard work of getting organisations on-board was already done.

JIPS – It sounds like you still had some challenges and needed to strengthen trust first.

Steph – We were working in a sensitive environment and proposing to carry out by far the largest data collection exercise conducted in the camps since they were established five years previously. Of course people had questions. The government and some of the camp committees raised a number of well-grounded concerns, but once we explained the objectives of the exercise and that all the data would be anonymous for protection reasons, everyone got behind the project. 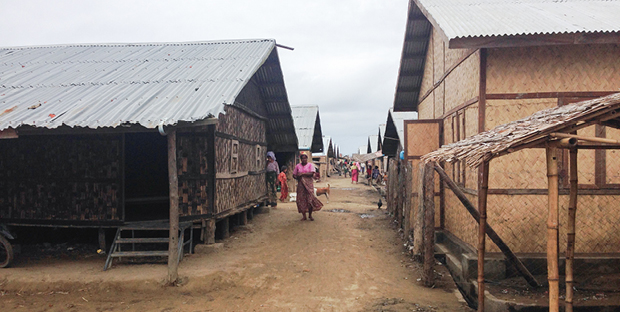 The second phase of the profiling process – the data collection – was also hectic at times. The electricity in Sittwe would sometimes be out for days at a time, and in the evenings we would only run the generator for the staff guesthouse. So I would have 50 smart-phones charging at my house overnight. Every morning, the team leaders [each responsible for monitoring a small team of enumerators in the field] would come over at about 7.30 a.m. to grab the phones and plan the day together with the field coordinator [who was there to help oversee the data collection in the field]. Lucky I had such forgiving flatmates!

JIPS – So you probably got to know the team very well?

Steph – Definitely. After catching up with them in the morning, they would head out to the field. Depending on what I was doing, I would either go with them to monitor the data collection and make sure it was all going smoothly, or I would be at home checking the data for any mistakes. By the end of the day, the team leaders would come back to my place to upload the surveys, plug in the phones and talk about any issues they experienced. One day when my mum was visiting, I had been held up in a meeting and came home to find two of the team who had finished their work were teaching my mum how to brew up a local flower tea. Yeah, we got to know each other well. They were a wonderful group of people to work with. The whole team, especially the camp-based staff, put in a lot of effort during this phase, working long days in tough conditions. And then the final stage …

Steph – I was pretty much at home writing all day, day in day out. We thought we would be able to do the writing and report designing in about two or three weeks. It ended up being more like two months before we had the final report!

Before I started writing the report, we organised Cluster-specific meetings to analyse the data. This was great because it meant that we were able to bring together all the experts for a particular Cluster (like food security or health) from both the Government and the humanitarian community. Then we would look at the data together and discuss what it meant, whether it fitted with their understanding of the situation and why something might be happening. Because it was such a collaborative exercise, it led to a much richer analysis of the data but it also meant that there were a lot of different considerations to be taken into account when writing up the report.

JIPS – At the report launch event in Geneva, the profiling exercise partners presented the community participation videos that you had produced together with IDPs from the camps covered by the exercise. That was just fascinating.

Steph – The real highlight for me was when we were showing the pilot of the film in the IDP camps. There was one man in the audience who I noticed writing on his hand during the screening. I talked to him afterwards and he said: “We live in this camp but we don’t know even how many people we are living here. We need to know.” He had written on his hand the total number of people in the camps, the proportion that had come from Sittwe, the rates of education and several other key facts. 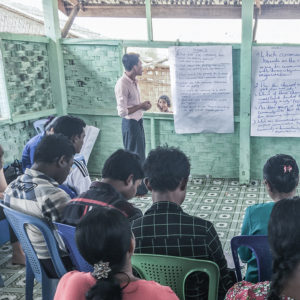 Workshop with IDPs from the camps to elaborate preferred ways of communicating with communities, in particular about the profiling results.

JIPS – So it had a personal value to him?

Steph – Exactly. It made me feel like the work we had done was of direct value. Hopefully the results of the profiling improve the lives of the people we interviewed by informing humanitarian projects, guiding policy and grounding advocacy in evidence, but here was an example of the intrinsic value of what we had done. I could see directly the impact it had on someone. This was a real highlight.

JIPS – That is beautiful. We often think of data being useful if it contributes to X program, but this demonstrates that it can also contribute to a change in people’s worldview. That’s something we don’t often talk about as a benefit.

Steph – Yes, I think the intrinsic value that data can have for people of concern is something that we as the humanitarian community need to focus on more.