How IDPs Used Video to Explain the Profiling Analysis to their Communities: The Example of Sittwe, Myanmar (2017) - JIPS - Joint IDP Profiling Service

How IDPs Used Video to Explain the Profiling Analysis to their Communities: The Example of Sittwe, Myanmar (2017)

After the launch in Myanmar in August 2017, the Global Camp Coordination and Camp Management  (CCCM) Cluster and JIPS were delighted to introduce the Sittwe Camp Profiling Report to the global community in Geneva. The profiling was carried out in Sittwe Township in Rakhine State, Myanmar between December 2016 and March 2017.

The event also presented an opportunity to showcase a new approach to generate community feedback to a profiling exercise. Building on an innovation project elaborated at JIPS in partnership with UNHCR Innovation and implemented by the DRC / CCCM Myanmar, a film was produced with and for the communities, making the profiling findings available to a largely illiterate audience.

The methodologically rigorous approach as cornerstone

As Kimberly Roberson, Global CCCM Cluster Coordinator for UNHCR, highlighted during the event, “a key asset of the study is the diversity of sites and communities that are included, looking not only at displaced populations but also at host communities nearby. Thus the study helps to better understand not only the situation in the IDP camps but also their environment, and provides a sound evidence-base for improved response.”

For Edward Benson, National CCCM Cluster Coordinator, UNHCR Myanmar, the profiling findings were essential for advocacy and programming alike: “You feel you know what is going on, but you don’t really until you have the data.” Together with Sophie Everest, CCCM Coordinator, DRC Myanmar, he gave an overview of some of the findings from the profiling exercise, including:

Language skills and literacy are currently low in the IDP camps in and around Sittwe. However, they are highly correlated with having a stable, salaried job – which only 66% of the working aged have in the Muslim camps. Literacy level and language skills should also be better considered when designing community outreach activities. 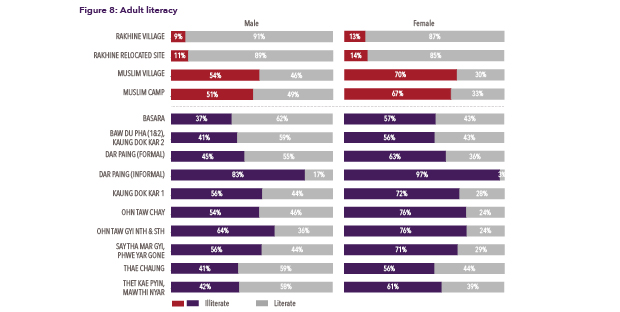 Most people have been living in the camps for over 3 years, with a majority coming from Sittwe downtown.

According to the sectorial findings, most people in the camps are dependent on food assistance, and food is considered the number one priority for people in the camps. The rations mainly come from WFP but also sometimes from private donations and local NGOs, such as the Myanmar Resource Foundation. In addition, WASH standards are low, with many overcrowded camps lacking latrines. The profiling also found that people have difficulties paying their medical bills.

Video with and for the IDP communities

“Using role plays and videos is an innovative idea and great example for generating communication with communities. We need more examples like this.” Cecilia Jimenez-Damary, Special Rapporteur on the Human Rights of IDPs, underscored just how important it is to involve communities in a profiling process and get their feedback to validate the analysis.

Developed and realised with and for the community members from the 14 camps and villages covered by the profiling exercise, the video summarises the profiling process and methodology, and discusses key findings. Find out more about how the video was produced and shared with IDP communities.

Both the video and the profiling report were well received, indicating that the film was a good way of engaging with communities, as well as that the profiling results accurately reflected realities experienced in camps. 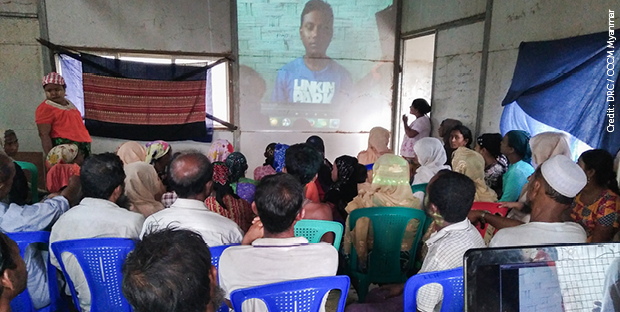 One main improvement was pointed out by the community feedback: the video lacked information on findings related to the issue of levels of overcrowding in the camp shelters. This topic was analysed in the profiling report but not included in the video in order to avoid reinforcing existing tensions. Recognising that shelter conditions is an issue in the camps, DRC is currently looking into ways to explain to the communities international standards for shelter, and what the organisation does to meet them. DRC is also advocating with relevant authorities to improve the situation.

The project was a great learning opportunity on how to achieve two-way communication with communities. DRC is planning to work with NRC and LWF to organise similar video screenings in the other eight IDP camps that they are managing in the Sittwe rural area. Building on the lessons learned from this new way of community feedback and validation, DRC is also adjusting its communication strategy with the communities across all of their CCCM programming.

For JIPS, this experience is also highly valuable for future profiling exercises. As Assanke Koedam, Information Management Manager, observed, “it was relatively easy and fast to engage communities in the profiling, and yet unfortunately it is rarely done after data collection”. The experience in Myanmar will help us to further strengthen and advocate for the importance of community participation approaches in future exercises.