Profiling of Internal Displacement in the Island Provinces of Bangsamoro Autonomous Region in Muslim Mindanao (BARMM/Philippines; 2021) 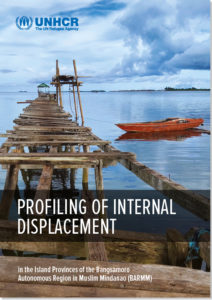 Against the background of scarce data on internal displacement on the islands of Basilan, Sulu and Tawi-Tawi (BaSulTa), in August 2019 UNHCR Philippines together with the Ministry of Social Services and Development (MSSD) and the Ministry of the Interior and Local Government (MILG) conducted BARMM-wide consultations. The discussions involved representatives from the provincial, municipal and barangay local government units, UN agencies, civil society organisations, academia, security sectors and IDP leaders, and established their support and committed engagement for a collaborative profiling exercise.

Implemented between 2019 and 2021, this profiling report outlines the key findings and recommendations of the exercise regarding internal displacement in the island provinces of Basulta, Sulu and Tawi-Tawi in the Bangsamoro Autonomous Region in Muslim Mindanao (BARMM).

The exercise was endorsed and supported by the BARMM MILG and MSSD, the local government units on municipal and barangay level in the BaSulTa provinces, the provincial and municipal and social service offices and the Provincial Disaster Risk Reduction Management Offices (PDRRMO) of Basilan, Sulu and Tawi- Tawi. JIPS provided technical support throughout the exercise, made possible through the generous support of the American people through the Bureau for Humanitarian Assistance (BHA/USAID) and the Danish Development Cooperation Agency (DANIDA).

The collaborative profiling exercise implemented in the Tawi-Tawi province also looked at the Sama Bajau. They are one of the State-identified populations at risk of statelessness in the Philippines, due to their itinerant lifestyle and generations of non-registration of birth.

Note: Since the finalization of the profiling reports in April 2021 and throughout the course of the profiling exercise, several findings and recommendations have already been implemented and acted upon by the provincial and municipal government units. These initial steps have been consolidated into an annex to the profiling report. The document also provides insights into the discussions during the presentations of the findings and recommendations in the BaSulTa provinces on in July 2021.