Decisions, when effectively informed by sound and shared evidence, can bring about true positive change (read more). The recent profiling exercise on IDPs and people at risk of statelessness in the island provinces of Sulu, Basilan and Tawi-Tawi (Bangsamoro Autonomous Region of Mindanao [BARMM], Philippines), is among the prime examples where we can see the direct use of the information generated for concrete actions to address internal displacement and statelessness. This was highlighted during a global virtual event, co-organised by JIPS and UNHCR Philippines on 26th January 2022.

The value of the collaborative process that underpinned the exercise was highlighted across the board as being critical, not only for the positive uptake of the results but also for the longer-term collaboration and commitment of BARMM and province-level authorities to the cause of IDPs and the Sama Bajaus. The process was coordinated by a Profiling Working Group, that was led by UNHCR Philippines, the Ministry of Social Services and Development (MSSD) and the Ministry of the Interior and Local Government (MILG) of the BARMM region, and received technical support from JIPS.

Counting more than 100 participants from government counterparts in the Philippines and other countries, donors, the international community working on internal displacement and statelessness, and civil society organisations, the event featured high-level speakers including Cecilia Jimenez-Damary, Special Rapporteur on the human rights of Internally Displaced People; Atty. Raissa Jajurie, Minister of Social Service and Development of BARMM; Gustavo Gonzalez, UN Resident Coordinator to the Philippines; Samuel Cheung, UNHCR’s Chief of the IDP Section; and Natalia Krynsky Baal, Head of Secretariat of the Expert Group in Refugee, IDP and Statelessness Statistics (EGRISS). They set the scene for the event, highlighting the value of the profiling at the provincial, national and global levels, and emphasising partners’ continued commitment to pursuing the profiling recommendations.

Previously presented at the provincial and Mindanao levels in the Philippines, the profiling results foster a common understanding on the living conditions, vulnerabilities and needs of internally displaced persons as well as the Sama Bajau, a State-identified population at risk of statelessness, in the geographically isolated and hard-to-reach island provinces that have been little considered in humanitarian and development interventions this far (find out more about the findings). Critical steps taken on the basis of the findings include improved wash facilities in some of the IDP evacuation centers; assistance to families that have returned but continued to face challenges due to their displacement; birth registration of Sama Bajaus; and informing the implementation of the IDP bill. 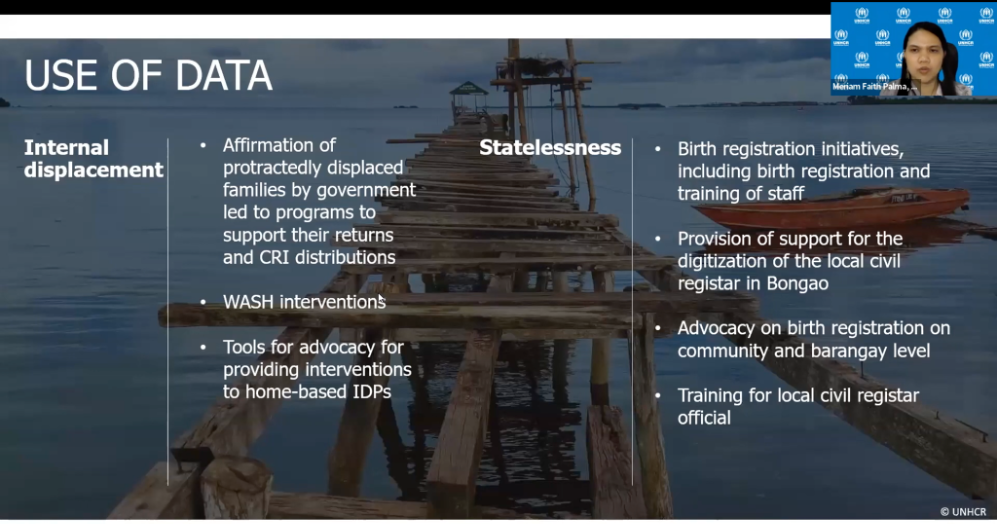 Find out more: watch the video and leave your feedback in the comment box!

Beyond the use of the profiling process and insights for the displacement context in the Philippines, the exercise also provides a valuable use case and contribution to the body of good practices on broader priorities as outlined by recent global-level initiatives, including the UN Secretary-General’s High-Level Panel on Internal Displacement and the related draft Action Agenda of the Secretary-General. It offers field-tested approaches to ensure the active and meaningful engagement of affected communities as well as local and national authorities throughout the data collection and joint analysis process, thus fostering local ownership and leadership and informing concerted action by government, humanitarian and development actors. And finally, the event also contributed to the ongoing effort of the EGRISS to establish international standards on statelessness statistics.