Scoping & Technical Mission to the Philippines: Profiling the Islands of Basilan, Sulu and Tawi-Tawi

Over the last decades, the Philippines have been experiencing both disaster- and conflict-induced displacement. The recently ratified Bangsamoro Autonomous Region in Muslim Mindanao (BARMM, including the three southern islands of Basilan, Sulu and Tawi-Tawi) has among the highest number of internally displaced people (IDPs) due to conflict and violence.[1] Due to clan feuds and clashes between government forces and non-state armed groups, the capacity of both the government and humanitarian actors to monitor the humanitarian situation on the ground in this region is limited.

Thus, UNHCR Philippines together with the Ministry of Social Services (MSS) and the Ministry of the Interior Local Government (MILG) have decided to jointly conduct a profiling exercise to better understand the humanitarian and long-term needs of both IDPs and displacement-affected host populations, in the islands of Basilan, Sulu and Tawi-Tawi where displacement is recurring or protracted, and consequently requested JIPS’ technical support for the profiling exercise.

During a 3-week mission in October 2019, our Profiling Advisor, Devora Levakova and Information Management Officer, Svend-Jonas Schelhorn worked with partners in country with the aim to:

CREATING A BETTER PICTURE OF THE DISPLACEMENT SITUATION

Current information indicates that most IDPs fled their homes due to armed conflict or natural disasters. The majority live in evacuation centers or home-based housing arrangements (i.e. staying with relatives or friends), with limited access to basic services. Some are newly displaced, while others are in protracted situations. In Tawi-Tawi, in addition to the IDPs a number of people are also at risk of becoming stateless.

As it stands, most data collection efforts have been focused on the mainland of Mindanao, such as the so-called municipality protection profiling exercises, which are conducted on a yearly basis, and the recent IDP profiling project of the Marawi conflict in December 2018. However, there is a lack of agreed-upon baseline data on the distinct displacement situations on the three islands of Basilan, Sulu and Tawi-Tawi (BASULTA).

This poses a challenge to regional and local (provincial and municipal) authorities when it comes to understanding population movements, verifying the total number of IDPs, and monitoring their situation including protection needs. From a data perspective, persistent issues include limited access to certain displaced populations due to the security restrictions in some areas and the islands’ remoteness, limited funding and resources for data collection and monitoring, and a lack of a shared data collection methodology and data management system.

The profiling exercise in the BASULTA islands aims to fill this critical data gap and to achieve a better understanding of the displacement situation and the needs of affected communities. Given the ongoing political transition to BARMM, the profiling will offer an opportunity to the Bangsamoro Transition Authority (BTA) to develop its own political administrative capacity in almost all areas, including its own protection-sensitive capacity, tools and mechanisms to track and monitor IDPs and identify their needs as well as those of the host communities.

The key goals of the collaborative profiling exercise are to:

With the many data challenges in mind, it was imperative for us at JIPS, to ensure that objectives were clarified and agreed upon by all profiling partners, together with the data collection methodology and tool, during our time in the Philippines. 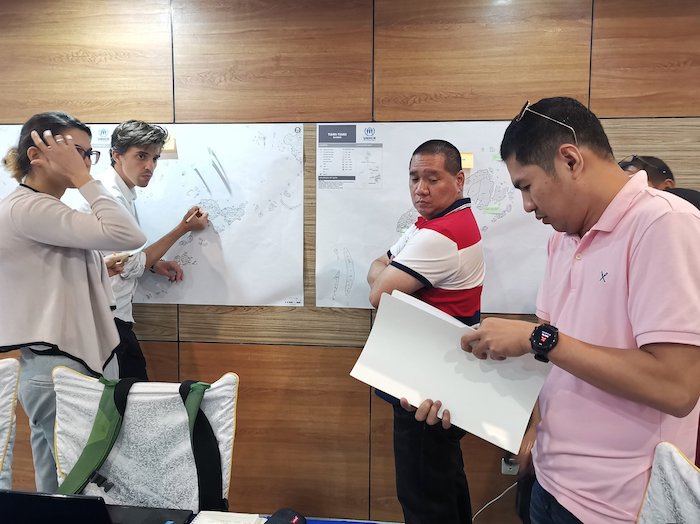 JIPS team at work with officials from the Provincial Government of Sulu and the Provincial Disaster Risk Reduction Management Office. ©UNHCR Philippines

It was an intense 3-week mission, kicking off with bilateral meetings with various stakeholders at the technical and decision-making levels. These included the Basilan, Sulu and Tawi-Tawi provincial governments, as well as meetings with the Department of Social Welfare and Development (DSWD) and Community and Family Services International (CFSI) to introduce JIPS’ work and its role in the profiling. Alongside these meetings, we worked with the teams from UNHCR and Integrated Resource Development for Tri-People (IRDT) to map the population groups and discuss sampling options.

The first week culminated in a BARMM-wide consultation workshop with representatives from provincial and local government units, civil society organisations and UNHCR. As a result, partners not only endorsed the Profiling Working Group terms of reference, including roles and responsibilities, but also validated the profiling objectives and timeframe, and agreed upon the key topics to be covered by the exercise.

During our second week, we held several work sessions with technical profiling partners to continue developing the profiling methodology and shape the data collection tool. During this time, we jointly reviewed the draft household questionnaire and examined each question, making sure it had a clear analytical contribution to the profiling objectives. The result was a questionnaire with 100 questions that all partners could agree upon.

During our last week in the Philippines, we organised a one-day debrief session with the Profiling Working Group, to present the final methodology and get their concluding input. We jointly reviewed the questionnaire, the locations for the data collection and number of IDP families to be included in the survey, the expected analytical outcomes per topic and the next steps in the profiling work plan. Working group members actively engaged throughout the session, leading to rich and insightful discussions and agreement on the data collection tools.

In addition to this, we also provided partners with support for the training of enumerators. This included a draft training agenda, an operational plan for the data collection, and presentations and activities to train enumerators on how to handle the questionnaire.

It has been great to see the high involvement of profiling partners, including local governments, together with the impressive participation and collaboration it has created between all partners.

At JIPS, we are currently supporting remotely as needed whilst the data collection process is on-going. We are looking forward to working with partners and the communities themselves on subsequently analysing the data and providing a deeper and contextualised analysis.