The Bangsamoro Autonomous Region in Muslim Mindanao (BARMM) encompasses the largest portion of internally displaced people (IDPs) in Mindanao (Philippines), mostly due to armed conflict. The local Protection Cluster team, led by UNHCR Philippines, and the local government have been monitoring IDP movements in the region since 2012, but it has proven challenging to collect data on the displacement situation in the island provinces of Basilan, Sulu, and Tawi-Tawi due to access issues.

The ongoing profiling exercise aims to help fill this data gap by providing a solid evidence base that is agreed upon by all profiling partners – including UNHCR Philippines leading the exercise in coordination with the Ministry of Social Services (MSS), the Ministry of the Interior Local Government (MILG), and the provincial governments of Basilan, Sulu and Tawi-Tawi, and with the Integrated Resource Development for Tri-People (IRDT) and JIPS providing technical support – and that they can jointly use to advocate and to inform short and long-term responses to internal displacement in Basilan, Sulu and Tawi-Tawi. In addition, the exercise seeks to achieve a better understanding of the situation of Sama Bajaus communities in Bongao, in the province of Tawi-Tawi, as they are at risk of being stateless and thus a particularly vulnerable population group. Here is an update on the exercise and on how we have been supporting partners on jointly analysing the data. 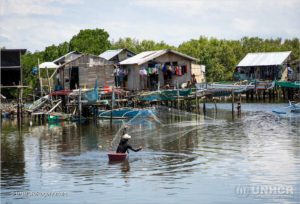 Residents go about their daily lives in the Valle Vista resettlement community, a few kilometres east of Zamboanga city, Mindanao, Philippines. The community is comprised of the Sama Bajau indigenous people and also contains a significant population of ethnic Tausug people. ; The Sama Bajau are an indigenous and nomadic sea-based ethnic minority group mostly living in the southern Philippines province of Mindanao, and often crossing into Malaysia and Indonesia. Thousands of families were forced to leave their homes and shelter in government-run evacuation centres during the Zamboanga conflict in 2013. Teachers at the evacuation centre persuaded families to send their children to a nearby school and it became apparent that birth certificates were crucial for things like accessing education. Now, some of the families are benefitting from a pilot project to register 1,500 Sama Bajau and provide them with birth certificates. The registration process, supported by UNHCR and UNICEF, begins in October 2019. The Sama Bajau are one of five population groups at risk of statelessness. It is thought there are between 10,000 and 15,000 Sama Bajau living in Zamboanga alone, around 85 per cent of whom have no birth certificates.

The exercise was initiated following BARMM-wide stakeholder consultations that were carried out by UNHCR between August and October 2019, and involved relevant ministries, the provincial governments of the BASULTA islands, and UN agencies including OCHA, IOM and the WFP. This helped secure support from key actors and develop mutually agreed objectives for the profiling exercise.

A JIPS technical mission took place in October 2019, to work with partners on establishing a technical working group, consolidating the profiling methodology, and designing the data collection tools including the sampling approach. We also supported the development of the training package for enumerators with data collecting taking place in November 2019, and worked closely with UNHCR Philippines on the data cleaning (December 2019 – January 2020) to get datasets ready for the analysis stage.

The profiling exercise in the Philippines is currently at the data analysis stage.

The analysis stage is always an exciting moment in a profiling exercise: this is often when the collaborative nature of the process becomes the most tangible, allowing for a deeper and contextualised analysis to unfold. We originally had planned for a field mission to be able to support partners hands-on, but had to change plans, among others due to the Covid-19 pandemic outbreak. Hence, we have been working remotely with a smaller group, composed of the partners who will facilitate the actual joint analysis process in-country (including UNHCR Philippines, IRDT and a consultant for the report writing), to prepare the joint analysis process.

“The training and workshop with the different stakeholders were productive. It was an opportunity to work with other actors from different contexts responding to IDP situations and [concerns regarding] the Sama Bajau population.” – Rasul Kulat, UNHCR Philippines

Over the course of a week, we facilitated a series of virtual workshops to support partners in country in developing the joint analysis approach and strengthening their capacity to facilitate the process with local actors from the three islands. Utilising a capacity sharing approach, we discussed good practices building on JIPS’ and UNHCR’s combined field experience and knowledge of the local context, agreed on the specific goals for the joint analysis step, and discussed the most appropriate methods for implementing it. During these discussions, terminology and definitions were one of the biggest challenges: making sure that we had a common language in the group and a shared understanding of the analysis approach as well as how theory would translate into practice. Using real-life examples from how joint analysis was done in other exercises – both those conducted by partners in-country and those supported by JIPS – helped us overcome this issue. Moving forward with the implementation of the joint analysis, partners will ensure that all participants have a common understanding around the data collection methodology used for the exercise, in particular the definition of target groups and the sampling approach.

Our work in the Philippines shows that capacity sharing and good communication around the data process are essential for informing quality joint analysis. With an agreed-upon workplan and tools in place, a preliminary analysis at hand, and a roadmap for community engagement activities ready, profiling partners will now implement the joint analysis process and design activities to discuss and validate findings at community level. We look forward to continuing to support throughout this process, so stay tuned to get updated.