We are excited to share the news of the profiling report from Thessaloniki, Greece, which was launched by partners in-country in December 2019. The result of a collaborative effort between the Municipality of Thessaloniki, UNHCR, various UN agencies and international NGOs, as well as Greek NGOs and volunteer groups, this report provides a shared and sound evidence base to better understand the situation and future intentions of refugees, asylum seekers and third country nationals not registered with the Asylum Service.

The event was kicked off with opening remarks and keynote speeches from Mr. Charis Aidonopoulous, the Deputy Mayor of Thessaloniki, and Mr. Luca Curci, Head of UNHCR’s sub-office, and followed by a discussion with all profiling partners. Moderated by Ms. Melina Spyridou, Head of the Department of Social Protection and Public Health of the Municipality of Thessaloniki, the session offered an opportunity to discuss key results and recommendations from the profiling report as well as hear about some of the current integration initiatives of different actors, such as IOM’s Helios programme.

Following the influx of people via the Greek-Turkish land border, and against the backdrop of a lack of information about the urban refugee population residing in the greater area of Thessaloniki, the city’s Municipality together with UNHCR and the wider humanitarian community decided to conduct a comprehensive urban profiling exercise. Upon their joint request, JIPS provided support throughout the process, both through engagement in an advisory capacity and offering technical support.

The profiling exercise looked at the situation of two target groups:

The profiling exercise furthermore aimed to produce a baseline and a set of indicators for measuring the degree of local integration. To achieve these objectives, the exercise combined a household survey with qualitative data collection, and also tested out community engagement at two key stages of the profiling exercise to ground-truth the approach and the results. This was specifically done: 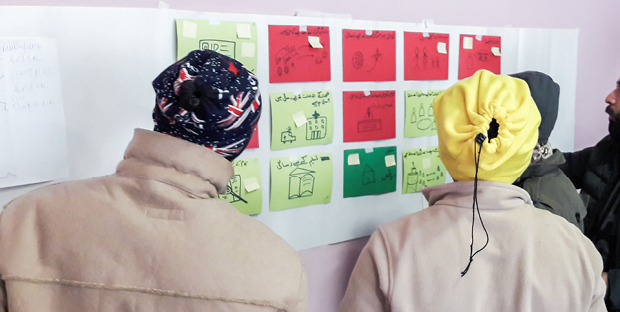 At JIPS we provided extensive on-site as well as remote technical support throughout the process, including several missions to Thessaloniki during which we delivered a three-day Profiling Coordination Training to get partners on the same page about the profiling exercise, and facilitated workshops to help partners define objectives and the methodological approach, define indicators, review preliminary findings and shape the analysis. Particular focus was given to engaging communities in the process; both in the very beginning to better understand the concept of local integration from the perspective of the refugees and asylum seekers in order to inform the analysis framework, but also towards the end where results were presented and jointly interpreted with refugees.

Basic demographics of of refugees and asylum seekers

The report found that a majority of the refugees and asylum seekers residing in the accommodation and self-accommodation schemes intended to stay in Thessaloniki (60% and 76% respectively). Finding employment and a recognised legal status were indicated as the main conditions for local integration.

However, among those residing in the Diavata Open Reception Facilities (ORF), more than a third (38%) stated wanting to move on to another EU country. For those intending to stay (45%) in Thessaloniki, local integration was strongly linked to finding a different accommodation solution to what they have at the time of surveying.

It was found that 73% of women were not working and not looking for work, compared to only 24% of the male working population (working aged person 15-67 years). Half of the economically inactive women reported household responsibilities as the reason for their inability to work/seek work. Overall, the lack of jobs as well as of Greek language skills were indicated as the main obstacles to finding employment across all strata.

Economic inactivity was observed to be higher in the accommodation scheme and the Diavata site. In comparison, the self-accommodated persons indicated a greater capacity for self-reliance, with 34% working and 53% looking for work. Nevertheless, this population group also indicated more often being unable to cover foreseen monthly expenses and tended to make more use of the free humanitarian services.

Tenure security was observed to be higher for self-accommodated persons, with a vast majority (81%) of those renting their own apartment (75%) having a contract while 75% of households in the accommodation scheme and the ORF didn’t know how long they could stay there.

At the time of the profiling exercise, no major issues were observed. However, in light of the 2019 changes in the legal environment, additional research may be necessary to assess the overall impact.

The report showed that there are double as many men compared to women, with the overall population of this target group being noticeably young with 82% being younger than 35 years of age.

Of the 336 individuals surveyed, 75% stated that they intended to apply for asylum in Greece and 48% indicated wanting to stay in Thessaloniki.

The vast majority (84%) of the respondents that had arrived within the month preceding the data collection, and about half of those having been in Thessaloniki between one and six months, were in a situation of homelessness.

Police note holders and persons with expired, or no documentation do not have the right to work legally in Greece, therefore it is unsurprising that 41% of the households with no documentation reported to have no income, 28% were using their own savings and another 18% were receiving money from family and friends abroad. Also, engagements in negative coping mechanisms, such as sex work, were highlighted informally to enumerators.

While a majority (55 out of 61 households) had managed to visit a health care facility, mainly an NGO clinic, the lack of Asylum Service documentation hindered the access of those persons to municipal services and others such as education.

As was emphasised during the launch event, the profiling results and analysis remain highly relevant. A comparison between the demographic data from the exercise (collected mid-2018) and recent UNHCR registration data (ProGres) shows that the basic demographic characteristic of the populations included in the study have not changed much.

The report launch event in Thessaloniki thus also offered the opportunity to jointly review the set of recommendations, share initiatives taken by partners since the data collection, and discuss potential further action points. Key recommendations from the report that were specifically highlighted at the launch event included the need:

The comprehensive profiling report from Thessaloniki, Greece is available to download (in English and Greek).