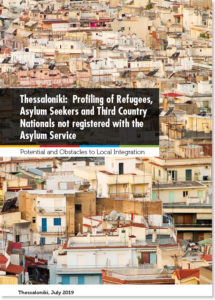 Thessaloniki: Profiling of Refugees, Asylum Seekers and Third Country Nationals not registered with the Asylum Service. Potential and Obstacles to Local Integration

Following the influx of people via the Greek-Turkish land border, the Municipality of Thessaloniki and the humanitarian community jointly decided to conduct a comprehensive urban profiling exercise. The collaborative exercise was led by a Profiling Advisory Group composed of representatives of the Municipality of Thessaloniki, Alkyone, ARSIS, Solidarity Now, INTERSOS, Help Refugees, Omnes, UNHCR, the Norwegian Refugee Council (NRC), the Danish Refugee Council (DRC) and the International Organization for Migration (IOM). JIPS supported the exercise throughout, through technical support and in an advisory capacity.

The objective of the profiling exercise was to explore the extent to which refugees and asylum seekers were moving towards local integration, and to provide the Municipality of Thessaloniki, and other relevant actors with the requisite information to allow them to better tailor advocacy initiatives, policy, service provision, and integration programmes.

The report is also available in Greek.