In the Central American region, the number of people affected by displacement has passed one million, including asylum seekers, refugees and IDPs – the latter constituting half of the estimated number. The reasons for displacement are multiple: violence, insecurity, persecution, and the deterioration of the political, social and human rights situation in the countries of the region.

In order to better design and coordinate joint regional initiatives in support of the displaced population, the Secretary General of SICA (Central American Integration System, in Spanish Sistema de la Integración Centroamericana) signed a Collaboration Agreement with the UNHCR Representative for Central America and Cuba in April 2014, with the intent of harmonising the regional legal framework and assisting in the production, management and analysis of updated statistical information and research. The 2014 Brazil Declaration and Plan of Action (BDPA) proposed the institutionalisation of a Human Rights Observatory for Displacement in Central America and, subsequently, a plan to strengthen the Central American Statistics Commission of SICA (CENTROESTAD), to administer, collect, analyse and share information on refugees, displaced persons and asylum applicants. Capacity building to NSOs and local governments by different international actors has ensued since. 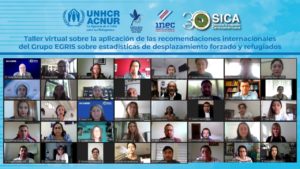 The 2-day workshop introduced the recently endorsed International Recommendations on IDP Statistics (IRIS) and explored with participants its application in their countries.

​​On June 7th, JIPS supported the online UNHCR-led workshop on IDP and refugee statistics for CENTROESTAD, during which the draft Spanish version of the EGRIS’ International Recommendations on IDP Statistics (IRIS) was launched. Consolidating official statistics on displacement is one of the priorities of the UNHCR-CENTROESTAD collaboration. The workshop, which unfolded in two days and counted more than 70 participants from member states and civil society organisations (CSOs), was aimed at tailoring the international recommendations to Central America’s national and regional contexts. Drawing from its expertise in the region, JIPS presented case studies from El Salvador and Colombia, illustrated some of the realities where it supported the development of tools to identify and evaluate internal displacement, and offered scenarios of IRIS’ potential application in internal displacement settings.

On day 2 of the workshop, Andres Lizcano Rodriguez, JIPS’ Acting Head of Field Support, led the participants through a practical session where they assessed the status of their countries in the implementation of the different components of the IRIS, namely: development of a statistical framework, durable solutions indicators, main tabulations and variables, data sources to be used, and coordination. Participants shared information about their main challenges and potential next steps.

JIPS’ Andrés Lizcano Rodriguez presenting the exercise on day 2 of the workshop.

The workshop contributed to bring a variety of actors together and put the implementation of the IRIS on the agenda. Partners from different countries also introduced their work: JIPS’ partner INEGI, for instance, presented initial considerations on which sources to use on internal displacement and at which advantage.

Ideally, the group would move ahead with the implementation of the IRIS, potentially request support from EGRIS, and continue to coordinate and exchange across countries in the region.

Read more about the workshop on the UNHCR and SICA websites. For the recording of the event, click here.