Behind the Scenes: Honduras’ Inter-Institutional Commission on IDPs & Where the Profiling Exercise Comes in (Apr 2019)

In Honduras, the Inter-institutional Commission for the Protection of Populations Displaced by Violence (CIPPDV, in Spanish; referred to as the “Commission” in this article) is leading efforts to generate a nationally representative evidence base that can inform the country’s laws, policies and operational responses to internal displacement due to violence.

Isiss Sauceda is the coordinator of the Directorate for the Protection of Persons Displaced Internally by Violence of the Secretariat for Human Rights (SEDH, in Spanish), which also coordinates the Commission. Following our latest mission in February to support partners in jointly analysing preliminary findings of the ongoing profiling exercise, we spoke to her about the Commission’s work to tackle displacement in Honduras, the role of the profiling exercises in this context, and what’s next – most notably the discussions to pass the IDP protection law in the National Congress. 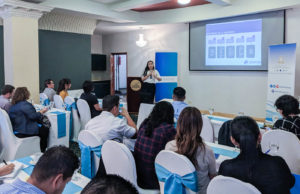 Towards a common understanding of results: JIPS’ latest profiling mission

We collaborated daily with Isiss during our in-country mission in February. This mission’s objective was to support a joint analysis process, in other words creating space for a wide range of partners to come together to digest, discuss and make sense of the data from the exercise. With the quantitative and qualitative data collection having taken up most of last year, for some partners this was the first time that they were seeing the results.

JIPS facilitated a number of workshops, both with the technical working group and the wider network of profiling partners from the Commission and beyond, as well as bilateral meetings and presentations of the findings to the Municipality of San Pedro Sula. The rich discussions resulted in the prioritisation of 41 findings and concrete feedback on areas of the analysis to develop further, as well as suggestions for how the data can be used for specific institutional responses. This will feed into the final profiling report, which is already well underway. Stay tuned for the launch of the final profiling report both in-country and in Geneva this summer.

This government-led profiling exercise is unique not only because of the sustained leadership of the Commission but because of its diverse membership as well. Founded in 2014, the Commission is made up of state institutions, civil society, and international organisations, recognising that all these entities need to work together for the response to internal displacement to be effective.

This current exercise builds off of past efforts in Honduras. For Isiss, who has worked with the Commission since 2016, this exercise is needed to update and deepen the evidence base that was produced through the previous profiling exercise in 2014- 2015. She highlights how the first study was instrumental in generating a baseline on the issue of violence-induced displacement in the country. It also served as the basis for drafting a law which, if passed by the Honduran National Congress in the coming months, would establish a mandate for the government to implement public policy on internal displacement, advancing significantly the protection of IDPs.

JIPS: How does the Commission work, and where does it fit within the state’s response to violence-induced displacement?

Isiss Sauceda: The creation of the Commission was the Honduran government’s first step [following its formal acknowledgement of internal displacement due to violence in the country]. When we started working in 2014, we didn’t have much information: we didn’t know a lot about the magnitude, geographic distribution, or dynamics of displacement within the country. One of the first activities of the Commission was therefore to implement a profiling exercise to get the necessary baseline information that would help us prioritise actions and responses.

The publication of the profiling results from this first exercise, which was done with support from JIPS and UNHCR, and the visit that same year of the then Special Rapporteur for the human rights of IDPs Chaloka Beyani, really helped to make the Commission realise that more permanent mechanisms and policies were needed to tackle the problem.

With the arrival of the Special Rapporteur, we committed to two things:

In 2017, the Secretariat for Human Rights created the Directorate for the Protection of Persons Displaced Internally by Violence as the operational body of the Commission, and it took the lead for drafting a law for the prevention, assistance and protection of forcibly displaced persons. [This was done through several participatory workshops and dialogue processes involving] over 30 entities, including the public sector, civil society, international organisations.

In 2016 and 2017, we also carried out a series of workshops and consultations with various entities, until last year [2018] where we realised a project of speaking to 70 victims of internal displacement. This was to make sure that the experiences of these people and their assistance and protection needs, as well as preferences for solutions, were considered and incorporated into the law.

Finally, the Commission concluded the process of drafting the bill and, on March 27, 2019, it handed the proposed law to the Honduran National Congress, and we will continue to advocate for it to be adopted.

Presentation of the law on IDPs to the National Congress from March 27 2019. Credit: ACNUR / CIPPDV.

Can you tell us more about the consultation process with the 70 victims?

This was one of the priorities for the CIPPDV in 2018: further engaging with communities affected by violence, and victims of displacement in particular. We built a kind of bridge between organisations providing assistance and government institutions.

We carried out this process in two different cities: El Progreso and Tegucigalpa. In both cases, [participants included] indigenous people – of the Lenca and Miskito groups -, LGBTQ people, children, and women. For each group, the Commission tailored the interview questions that allowed us to gather input on both assistance needs as well as the draft law.

It was a rich learning experience with many lessons for the Commission and everyone involved, because never before in the history of the country had victims been directly consulted. Coming closer to their reality and the very real experience of the victims is something we had not been able to do before. It gave us a different perspective.

Going back to the profiling exercises, why did you reach out for external support?

The reason we requested JIPS’ support was because the phenomenon of displacement was so new to us in Honduras. We needed JIPS’ technical expertise to help us carry out these profiling exercises, [from spelling out the indicators and developing the surveys, to collecting and analysing the data]. Also, I believe that the participatory way in which you set them up is extremely interesting and definitely adds value to both the process and the results.

[You come up with] a structured methodology [that you then] adjust to the context and institutional capacities in country [and get validation for by] the plurality of actors that are involved in the exercise. I think this is one of the main strengths of the work JIPS does with governments: the validation of the study depends on the level of participation. If you don’t have such a wide array of key actors involved, it becomes difficult to get them to recognise the results of this work.

The only thing I would suggest to change is to have a JIPS office in Central America [laughs]. Because I think the process is a bit more difficult due to the time difference and distance.

Definitely a reason to make good use of missions! How do you think the current profiling exercise can benefit the country’s efforts on addressing displacement?

Evidence is extremely important for decision making so, in this sense, the profiling exercise will be very valuable. This exercise tries to go much deeper than the previous one to understand the risk factors, displacement-related vulnerabilities, types of violence and causes of displacement, and the impact on IDPs.

The resulting evidence base will help inform public policies and programs in the fields of prevention, assistance and protection, and durable solutions – all of which are also relevant for the proposed law. The preliminary profiling results can already be used for bilateral discussions with the Congress. 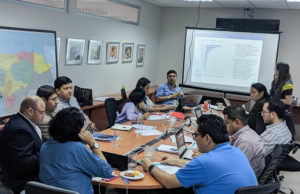 Workshop with the Commission partners to discuss the preliminary findings from the profiling exercise.

What’s next: law and profiling report

As Isiss has demonstrated, the Commission will continue its efforts to advocate for the approval of the project of law on internal displacement. The profiling report, planned to be launched this summer, will be timely to support the Commission’s efforts.

In the meantime, we will continue to support the profiling partners throughout the reporting phase, as well as contribute to disseminating the results at global level to enhance its reach and impact.

We at JIPS have also learned a lot from our work with the Commission over the years. At the end of the day, it is not the results alone that convince people to increase protection for IDPs; the way the results were obtained is equally important. The government-led and collaborative process exemplified in this profiling exercise will help ensure that the results are translated to concrete actions for the benefit of IDPs in search of solutions.

This interview was translated from the original Spanish by Francisco Pérez, and edited by Melissa Weihmayer and Corina Demottaz.

Did you find this article about the impact of profiling in Honduras interesting? Let us know at info@jips.org, or find us on Facebook, LinkedIn or Twitter.