Many of the high-level meetings and processes during the course of 2016 highlighted among other things the need for more and better data to inform responses to forced displacement. In a panel discussion in January, chaired by Professor Walter Kälin*, JIPS aimed to bring this discussion further by reflecting on the actual use of data in displacement response and exploring how profiling can contribute. (Part 1/4) 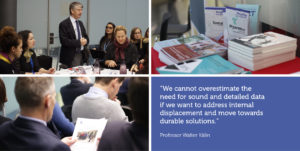 As Walter Kälin states in this opening remark: “We cannot overestimate the need for sound and detailed data if we want to address internal displacement and move towards durable solutions.”

Whether focusing on data for development response, urban-relevant data, the potential of new technologies, jointly analysing data, or simply just more data overall, it is necessary to concretely reflect on what data is actually needed as well as which data will be used. The discussion centred on examples from Honduras, Somalia and Iraq shared by three panellists who had experience conducting profiling and making use of its results in different national and urban contexts.

Need for a coherent and holistic approach

Building on the global policy dialogue that took place in 2016, having sound data that can inform not only humanitarian partners but also development and government actors is key.

“We have a long tradition of humanitarian needs assessments,” reflects Walter Kälin, “but we need to go beyond that. That’s very much what JIPS is doing through its profiling approach.”

This was well illustrated by all three panellists. In the case of Honduras, Sandra Ponce (Counsellor, Honduran Mission to the UN in Geneva) highlighted that the profiling data provided the Government with much needed evidence on the internal displacement situation in the country and helped to develop an appropriate policy and legal framework. In Mogadishu, Somalia, the profiling focused on an urban context where the majority of IDPs are living. Nina Schrepfer (UNHCR Chief IDP Section and formerly Protection Cluster Coordinator) argued that the value of the profiling came from the wealth of protection and solutions-oriented data it was able to produce. Conducted in collaboration with central and local authorities, it also resulted in the formulation of a government-led Somali IDP Durable Solutions Initiative. In Iraq, Jozef Merkx (UNHCR Representative in Colombia and before Coordinator in KRI) similarly highlighted the importance of the urban profiling’s methodology that included both area-based approaches and comparative analysis of refugees, IDPs and host populations. Analysis of vulnerabilities in this case helped inform a comprehensive cash-based strategy for the region.

The event also heard from Natalia Baal, JIPS Coordinator, who explains: “The most effective way to have an impact and make sure that data is used is to have access to data that you know where it came from, therefore that you can trust, understand and even feel ownership over.” As JIPS’ experience shows, profiling, when conducted in an inclusive manner, contributes not only to a better understanding of forced displacement, but also to inform joint action through providing agreed-upon good quality data. She goes on to present JIPS’ strategy 2015-2017 as well as plans for 2017 for input from participants.

JIPS is looking forward to follow and feed in to the reflections on how to shape the ‘new way of working’ as laid out by the various global events in 2016.