With a high-level event in Geneva, IDMC launched its Global Report on Internal Displacement (GRID) 2018, which includes global figures on internal displacement as of the end of 2017 and specific challenges encountered when producing and analysing them.

Figures on the total number of people displaced by disasters remain uncertain. This mainly depends on the scarcity of up-to-date data and lack of tracking of IDPs’ movements and vulnerabilities over time. Moreover, data show that displacement is often protracted, further limiting the ability of governments and humanitarian and development organisations to cope with the phenomenon and its effects on the population.

As clearly emerged during the discussion, both evidence and experience strongly suggest that country-led frameworks, aligned with global developments goals,  are the preferred path to achieve results in reducing and preventing displacement. 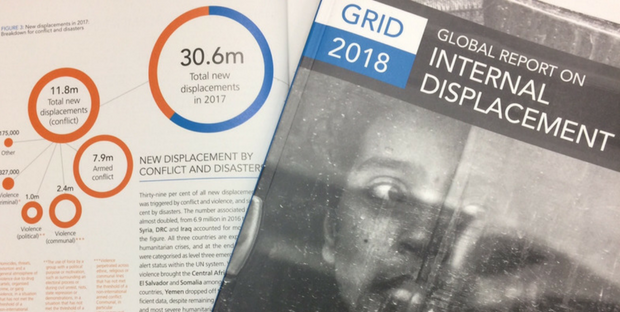 The 2018 Global Report on Internal Displacement.

As highlighted by IDMC’s director Alexandra Bilak, findings clearly show that, despite international efforts to apply human rights and humanitarian principles to IDPs, the effectiveness of governments and humanitarian and development actors in preventing and reducing displacement has been limited.

No matter how challenging, the discussion on what has not worked so far needs to happen, as failing to address this phenomenon in the long-term might also undermine the 2030 Agenda for Sustainable Development. Furthermore, with 2018 marking the 20th anniversary of the creation of the Guiding Principles on Internal Displacement -developed precisely to protect and assist IDPs and prevent displacement on a global level- the conversation appears to be even more timely and appropriate.

As suggested in the GRID, given that the humanitarian assistance and protection approach has proved insufficient, what is needed now is a shift toward prevention and risk reduction. It is critical that we stop treating displacement as a humanitarian problem alone and starting linking it to development planning and strategies. This will require a more comprehensive framing of internal displacement risk and different approaches to assess and reduce its negative impacts. In order to do so, IDMC argues, we first need to address the significant data challenges contributing to limit policy successes in preventing displacement and its harsh effects on people.

There is a widespread recognition of the fact that reliable data is key to policy development and planning, but JIPS experience shows that this is not only a question of filling data gaps and improving quality, but that the trustworthiness of data is often questioned. Countries need to own their data in order to include provisions to address internal displacement in their local and national development plans and their associated reporting on the SDGs.

It is often challenging for displacement-affected countries to overcome difficulties faced in the collection and analysis of data to build a reliable evidence-base, both because of limited expertise and a scarcity of resources. Nonetheless, the GRID reports that a number of countries have already committed to addressing the issue, for example by trying to monitor progress on the SDGs in ways that include consideration of IDPs by collecting disaggregated data against specific indicators.

In this sense, we believe that the work of the Expert Group on Refugee and IDP Statistics (EGRIS)  as an effort to develop recommendations and provide practical tools and guidance for national statistical systems to incorporate data on IDPs is particularly valuable and has the potential to help guide the process.  Moreover, investing in the delivery of support for governments and national statistical authorities is now a central part of JIPS’ ongoing three-year strategy. 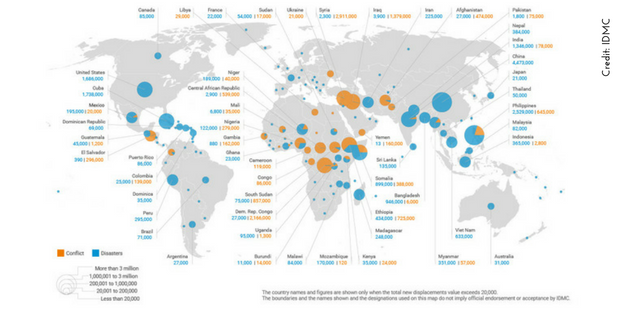 Figures on new displacement caused by conflict and disasters in 2017 (IDMC).

Internal displacement does not happen in the same way in all countries: therefore, national responses always need to be tailored to different national priorities and realities. In addition, some countries have been dealing with displacement for a long time, and have thus developed a stronger experience in addressing the problem than others. During the GRID launch, four country examples were shared.

H.E. Mr. Negash Kebret Botora, Ambassador and Permanent Representative of Ethiopia to the United Nations Office in Geneva, highlighted the core guiding principles developed to guide national response. These included government ownership of key processes, national leadership in implementing policies on IDPs, as well as the need to strengthen local and international partnerships to address the problem.

A strong focus on increasing national responsibility in dealing with displacement was also highlighted by H.E. Dr. Suraya Dalil, Ambassador and Permanent Representative of Afghanistan to the United Nations Office in Geneva. In this country, the lack of security is one of the main driving factors of internal displacement.

The situation is complicated by the simultaneous presence of refugees, IDPs and returnees in the country. Despite difficulties, in recent years some progress has been made by the government, which created a national policy on IDPs and an executive committee on displacement and return to deal with the issue. Still, decisions on how to allocate resources to address the needs of IDPs and returnees remain particularly critical.

In Iraq, internal displacement caused by conflict and violence has had a strong impact on the advancement of the country. As H.E. Mr. Mouayed Saleh, Ambassador and Permanent Representative of Iraq to the United Nations Office in Geneva, stated, Iraq needs massive resources to cope with displacement, as ineffectiveness to address the needs of the huge amount of IDPs in the country represents a clear obstacle to a full national recovery. And, as we often stress, there is no real development if IDPs are left behind.

Iraq’s situation is strikingly different from that of the Republic of Fiji, as in this case, instead of being triggered by conflict and violence, internal displacement is caused by rising sea-levels and the slow on-set effects of climate change.

The high frequency of disasters in Fiji exposed the need to move beyond crisis mode and towards a much stronger and stable system to be able to deal with persisting phenomena such as displacement. For this reason, as explained by H.E.Ms. Nazhat Shameem Khan, Ambassador and Permanent Representative of Fiji to the United Nations Office in Geneva, adopted relocation guidelines, that is to say people-centred democratic principles guiding national-led measures to relocate citizens from non-secure coastal areas to internal, more secure ones.

What’s next? Calling for a country-led framework

The GRID is crystal clear in calling for country-led frameworks, aligned with broader development goals, aimed to allow the development of national and global programmes, targets and standards for reducing and preventing internal displacement. Together with the firm recognition of the Guiding Principles, such efforts should take national priorities as their starting point. Through JIPS’ work in support of country-led profiling exercises and advice for other data systems, we hope to contribute through discrete exercises and ensure this is pursued through evidence-informed processes.