Working with IDPs’ Realities in an Urban World: Recommendations to the UN High-Level Panel on Internal Displacement

While it is widely repeated that a majority of IDPs across the world have relocated to towns and cities, the implications of the urban dimension – where IDPs are living, amongst whom, and within whose local jurisdiction – of displacement for policy and practice are rarely examined or developed. More than simply context, urban systems should be seen as active potential contributors to IDP protection, well-being, self-reliance and integration.

A proactive urban response to displacement is required. Instead of trying to prevent movements to towns and cities, we should be aiming for a world without long-term camps, where institutions, local authorities, service providers, and society in general in urban areas are able to provide an enabling environment that allows displaced people to contribute positively to the economic and social dimensions of city life, as urban citizens and rights-holders. As such, urban displacement requires a complete rethinking of how governments (local and national) and humanitarian and development actors prepare for and respond to displacement. 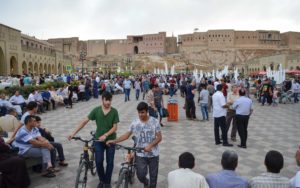 This submission, jointly developed by Dr. Isis Nuñez Ferrera from JIPS, Lucy Earle from the International Institute for Environment and Development (IIED), and Dyfed Aubrey and Stephanie Loose from UN-Habitat, includes four key messages, each underpinned by key recommendations and the need for better and actionable data:

➡️ Read the full submission, and also check out JIPS’ flagship submission to the High-Level Panel on the transformative potential of data in internal displacement situations.