The durable solutions analysis and action planning exercise in Darfur, Sudan, is in full swing: the data collection tools for the household survey and the area-level analysis, developed during the autumn 2020, have been tested, piloted, and utilized in the field. JIPS designed and facilitated several virtual and in-person training sessions for trainers and enumerators, and in parallel supported partners on the development and testing of the sampling approach.

Initiated in 2020, our support to partners in Sudan builds on this earlier exercise implemented in El Fasher. It is shaped around a hybrid approach with both remote and in-person work, and the continued COVID-19 pandemic has brought us to adapt and rethink certain aspects of it. This article is part 2/2 of our update on our work in Sudan, and focuses on how we used village sketching and pre-fieldwork missions as innovative ways to overcome operational challenges and discuss insights and lessons learned from this experience.

Check out part 1/2 for a more general update on the exercise and on how the collaborative structure is being expanded at both national and local levels. 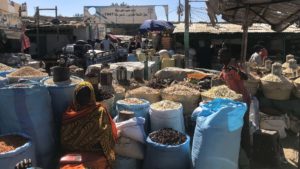 As part of our technical support, we designed a comprehensive “training of trainers” workshop for the field focal points, who were in charge of supervising the enumerators and managing the data collection work. We had to tailor the training in several ways, conducting it for the first time in an entirely remote mode due to the continued pandemic, but also to adjust it to the specific partners and context of the durable solutions analysis in Darfur.

IOM – the household level data collection partner – is known in Darfur as leading agency in conducting registrations of forcibly displaced persons. However, registrations and household surveys serve different purposes and thus require very different methodological and operational approaches. Registrations, on the one hand, typically aim to facilitate access to basic assistance and protection. When registering with a field team, a person is commonly asked to provide demographic and some socio-economic information (e.g. age, sex, location, economic activity, consumption, health, etc.).

Household surveys, on the other hand, can serve diverse objectives ranging from informing programming and assistance, to underpinning the design of policies, advocacy, or development strategies. The survey design, including the questionnaire(s) and sampling approach, needs to be tailored to the specific exercise and context. In most cases, only a representative subset of the target population group is being surveyed. Some questions might be sensitive, for instance regarding a person’s displacement experience, their perspective on social cohesion, or their future intentions. In the context of Sudan, with the recent peace agreement we also had to be extra careful to avoid steering tensions between or within communities, or creating confusion about how the data would be used and that the results would be for the benefit of all affected communities and not just those interviewed.

This meant data collection partners had to adjust their approach – and their mindset and perceptions more broadly speaking – for the purpose of the durable solutions analysis. We shaped the training in a way that would allow them do so and best prepare to the field work ahead. We dived deep into the exercise objectives and the mixed methods approach, including target populations, geographical focus, thematic modules and topics, and relevant tools such as KoBo. We tested the key modules, jointly refined the questions to contextualise them, and reviewed the sampling approach.

During the training, we also reviewed the questions in terms of their relevance for the Sudanese context and the agreed exercise objectives, and discussed whether they were formulated in a way that would make sense to respondents. Working off an agreed-upon questionnaire, we adjusted the plain Arabic language to the dialects, languages, and customs of each location in focus. We also discussed the sensitivity of each question and how participants might mitigate any related challenges. 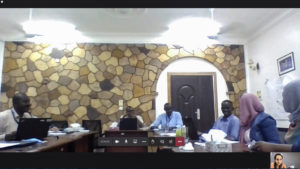 The training for field focal persons was done entirely remotely. This meant JIPS had to adapt its approach, for instance by having the participants themselves co-facilitate the discussions and create posters/handouts, to ensure a rich learning experience and encourage interactions with and between them.

We used the training of trainers to help partners prepare the operational planning, including the enumerator training, logistics, and field pilot testing under multiple scenarios.

In preparation for the pre-fieldwork mission, we tasked field focal points to create initial sketches of villages, as an innovative approach to generate a good understanding of the fundamental characteristics and components of each target locality. We trained them on identifying and sketching out all the different areas/zones/neighbourhoods of the villages and towns in the eight localities, including clear boundaries and landmarks. The training focused on equipping the focal points with the technical know-how to interview community leaders and create village sketches accordingly. 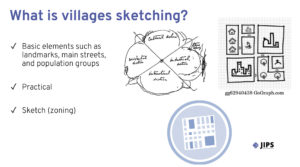 The village sketching aimed to generate a good understanding of the fundamental characteristics and components of each target locality, based on the way residents living there perceived them. © JIPS

The village sketching helped get an in-depth understanding of the spatial distribution of target populations. They directly informed the sampling approach and specifically the household sample selection. As it turned out later on during the pre-fieldwork missions, the village sketches also proved highly valuable to connect and communicate with local communities, by fostering a sentiment of field focal persons being “insiders” that are aware and knowledgeable of the local context, rather than merely data collectors.

Following the training of field focal persons, we also supported the second training of enumerators. Along with IOM trainers, we co-led the in-person training sessions for enumerators in El Fasher and Nyala, and remotely supported the training in Geneina. The sessions covered three main components: the questionnaire, the sample selection methods, and the operational planning. We made participants work their way hands-on through each and every question and answer option, to make sure they understood them well and were thus able to communicate accurately in local dialects and languages.

Sessions were structured around group work and one-on-one simulations administering the survey in both Arabic and local languages. In the latter case, survey questions were subsequently back translated and interpreted by another participant so that trainers could ensure the messages were accurately communicated in all the different dialects. 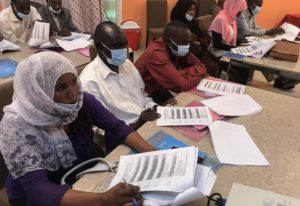 During the enumerator training sessions, participants simulated administering the survey to each other, in the local dialects and using the KoBo tool. El Fasher/Sudan, November 2020. © JIPS / Ola Samarah.

For the sampling component, the working sessions focused on the sample selection method. We wanted to make sure that the required sample representation would be achieved during data collection and that all communities were included to enable a rich analysis in line with the overall objectives of the exercise while minimising the risk of marginalisation and social tensions. Enumerators were split into groups according to the villages they were going to focus on. Building on the village sketches developed by the field focal persons during pre-fieldwork missions and the fieldwork manuals created by JIPS, the detailed sample selection approach was discussed with the enumerators who had valuable input on its applicability. For example, in Um Dukhun, given the large dispersion of households, the selection ‘counting pattern’ had to be decreased, and to minimize the effect on the spatial coverage of the sample, more data collection starting points were suggested for each village.

A complex data collection exercise in a rapidly-changing context

The sampling approach was developed in parallel to the training sessions of field focal persons and based on the pre-fieldwork missions, during which field focal persons sketched villages within each targeted locality. Given the combined objectives of the overall exercise – to produce a durable solutions analysis as well as an area-based analysis by locality –, a stratified multi-stage sampling approach was adopted and adapted for some localities as necessary. Villages were treated as the primary sampling unit (PSU) and households as the secondary sampling unit (SSU), with each locality being considered as an independent sample frame. (Learn more about sampling approaches in displacement contexts)

Accordingly, for each target group the first sampling stage consisted of selecting villages within each locality with probabilities that were proportional to size (i.e. villages with higher number of households were more likely to be selected for the survey). The second stage sample selection was for the household units within each selected village.

The sample size of each group was distributed across localities, including central and satellite villages from which the household sample was randomly drawn. This means that the results will be representative for each target group at the locality level, and allow for a comparison between target groups in each locality but not across localities. However, the pre-field missions revealed several challenges, which triggered a need for an amended sampling approach in several localities. For example, the missions captured the rapid population movement within localities, where many villages were completely empty or burned in a matter of weeks. This, in turn, had implications on the sample distribution and the sample selection approach.

Up next: joint analysis of the data

The efforts put into the training sessions and pre-fieldwork were worth it: at JIPS we have been monitoring the quality of the data throughout the collection phase (mid-December 2020 till January 2021). So far, we have not seen major issues nor received any reports on social tensions due to the random selection of the sample.

Upon the completion of fieldwork in each locality, we conducted a debrief session with IOM field focal persons and enumerators to ensure that operational lessons learned are well documented. In some instances, we had to adapt the sampling operationalisation due to the changing realities in the target locations; all changes are done upon strategic consultations with the Peacebuilding Fund (PBF) partner agencies.

We are currently supporting partners in Sudan by processing all the eight survey datasets and conducting a preliminary analysis thereof. For this purpose, we are merging the area level and survey level results into one report by locality. The next step will be to prepare and co-facilitate workshops at state level, together with PBF agencies and the DSWG, to jointly analyse the results and draft the durable solutions action plans.