At JIPS we were delighted to be able to attend UN-Habitat’s inaugural Assembly in Nairobi at the end of May 2019. Spread over a whole week, the event was a clear success for the organisation and created a space for a wide variety of thought-provoking events alongside the main agenda. Having participated as a relatively new partner of UN-Habitat, three key take-aways from the JIPS team include: 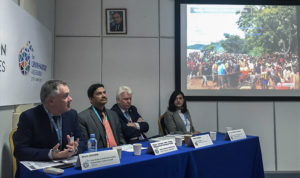 A success for UN-Habitat

Overall the Assembly was clearly a success for UN-Habitat with concrete progress made in terms of shaping the organisation’s new governance model and appointing key positions; securing attendance from senior officials including Heads of State from Kenya, South Sudan and Yemen; and endorsing the organisation’s 5-year strategy for 2020-2025. With active involvement of a variety of stakeholders and an eclectic range of events and booths – from innovations in sustainable building materials to participatory slum dwellers mapping, from methodologies for monitoring SDGs in urban areas to urban crisis response – there was something for every ‘urban professional’ at the Assembly.

Including displacement in urban planning

Of particular interest to us was the thematic focus on forced displacement and migration. This was evident in Ministerial commitments to the implementation of the New Urban Agenda and interventions from Yemen and by Niger on behalf of the African Group in various high-level sessions. It was also clear from a series of practitioner-organised side events including one on integration of migrants in urban areas, another presenting analysis from IDMC’s 2019 GRID, and a third co-organised by JIPS, UNHCR and UN-Habitat’s Urban Labs team on Addressing Displacement in Cities: Evidence-building, new settlement approaches and infrastructure solutions. 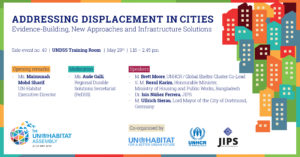 Flyer of the side event no. 40 at UN-Habitat’s first Assembly, titles “Addressing Displacement in Cities: Evidence-Building, New Approaches and Infrastructure Solutions”

Moderated by ReDSS’ Aude Galli and with interventions from Ullrich Sierau, Lord Mayor of the City of Dortmund (Germany) and the Ambassador to Kenya, Major General Abul Kalam Mohammad Humayun Kabir, the key focus was the need for governments (at central and municipal level) as well as humanitarian and development partners to stop expecting displacement to be a short-lived reality. Refugees and IDPs come to urban areas for medium to long term periods, and this needs to be recognised from the get-go so it can be planned for and addressed adequately by all relevant stakeholders in terms of governance, financing and social cohesion.

Complemented with interventions from UNHCR / Global Shelter Cluster Co-Lead, Brett Moore, and JIPS’ Head of Field Support and Capacity Building, Isis Núñez Ferrera, a deeper dive into the programmatic area of shelter and infrastructure on the one hand, and data and analysis through profiling on the other hand, were also provided. Isis brought forward JIPS’ perspective on data and analysis requirements for contexts where “displacement meets the urban” highlighting the importance of place, governance and people. Sharing examples from Iraq, Sudan and Syria, she engaged the audience on key recommendations for implementing such profiling processes:

The discussion and Q&A showed a noticeable interest from UN-Habitat staff and other urban practitioners in the audience, eager to understand urban displacement realities and the approaches needed to address it. This included discussions on the added value and the application of a comparative approach between displaced and non-displaced populations in an urban area, the methods needed to integrate a capacity building approach of urban actors during the evidence-building process, and how to facilitate leadership of local authorities in the process.

Forced displacement was also closely connected to discussions on urbanising responses to crisis/emergency situations. It was a central theme, for example, of the side event organised by the Global Alliance for Urban Crises with speakers from Afghanistan and Somalia. 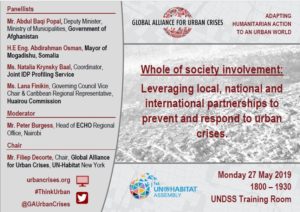 JIPS’ Coordinator, Natalia Baal, was a panelist at the Global Alliance for Urban Crises’ side event, on May 27.

The Deputy Minister for Municipalities in Afghanistan highlighted the connection between finding solutions for displaced populations (including IDPs and returning refugees) and work underway to scale up implementation of the national strategy to improve conditions in informal settlements. Dr. Hodan Ali, from the Durable Solutions Unit of the Benadir Regional Administration of Somalia, also demonstrated why the phenomenon of displacement in Mogadishu was a key issue for urban planning based on evidence that the majority of the vast IDP population wish to locally integrate into the city rather than to return.

Moderated by Peter Burgess, from ECHO’s Regional Office for Eastern & Southern Africa, the event also provided an opportunity to highlight the critical role of data – and more specifically profiling – to inform urban crisis response. In addition to the two country perspectives provided, Natalia Baal, JIPS’ Coordinator, was able to share key lessons regarding the benefits and challenges associated with this work based on JIPS experience. These included:

With opening remarks from Filiep Decorte, the session also made space to introduce the work of the Global Alliance for Urban Crises and bring attention to some of its key achievements to date. Throughout the session, a recurring theme was the importance of investing in and developing common language and terminology between various stakeholders involved in responding to urban crises. 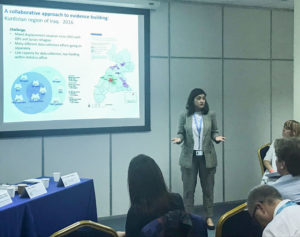 Dr. Isis Núñez Ferrera presenting at the UN-Habitat Assembly side event the case of the profiling exercise done in the Kurdistan Region of Iraq.

Crystal clear from the Assembly overall, was the central role that community engagement (or participatory planning processes), innovation (both through partnerships and technology) and data (about urban systems and urban populations) play in implementing the New Urban Agenda. They lie at the heart of strong urban planning and urban crisis response.

Participatory approaches, in particular, received a lot of air time. Importantly, the focus was not on why it is needed (this was more or less accepted by participants at the Assembly), but on how to do it in practice, with a wealth of interventions demonstrating examples of its added value, including the Know your City campaign, a joint initiative of Slum Dwellers International (SDI), UCLG and Cities Alliance, demonstrating community-driven data innovations to reduce inequalities and designing evidence-based interventions with the communities themselves.

Innovation, the overall theme of the Assembly, arose in various forms. Sometimes, admittedly, as a buzz word, but in other instances showcasing remarkable achievements such as UN-Habitat’s collaboration with Colab in Brazil who have developed a ‘citizen to government engagement platform’ that crowd-sources priorities for local authorities to address from experience of local citizens in participating municipalities and is now being tested to help monitor urban-relevant SDGs.

Data of course was everywhere. In addition to profiling approaches showcased by JIPS, various events, booths and presentations shared experiences and initiatives ranging from Slum Dwellers International, to the Global Network on Land Tenure’s SDG monitoring, from the Global Urban Observatory to relevant SDGs. One broad reflection, however, is the clear need to better define, or better articulate, how displacement-specific data and analysis can be better integrated with long-established urban analysis approaches, for a more adequate and effective response to displacement in urban areas.

With an increasing recognition of the role of urban planners and the leadership of local authorities in urban displacement, a closer collaboration and exchange is needed to identify what are the specific displacement information needs that can inform joined up action and adequate urban interventions in displacement contexts. At JIPS, we work on this through our various profiling support projects, but it would be a valuable topic to be addressed by a wider community of experts.