The Expert Group on Refugee and IDP Statistics (EGRIS) presented the results of its work at this year’s UN Statistical Commission and received widespread support from member states: the International Recommendations on Refugee Statistics and the Technical Report on Statistics of IDPs have been adopted and the next steps of the work have been endorsed. 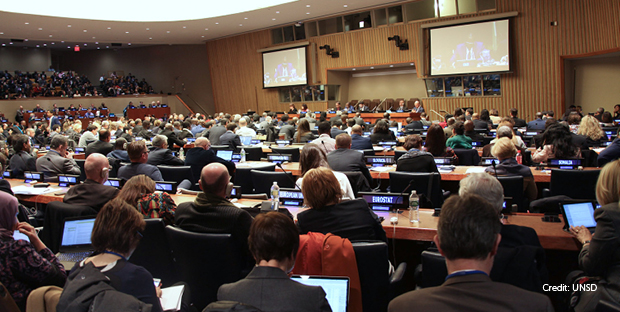 The Expert Group on Refugee and IDP Statistics (EGRIS)

Established in 2016 through a mandate by the UN Statistical Commission (UNSC), the EGRIS is an international collective of national statistical offices, immigration authorities and subject matter experts.

Overseen by a Steering Group of UNHCR, Statistics Norway and Eurostat, the Expert Group is working to develop international recommendations, standards and guidance for the collection and production of both refugee and IDP statistics. With the ultimate goal of improving the quality of official statistics on these populations, the EGRIS is working closely with statistical authorities to ensure strong linkages with national planning, budgeting and policy processes alike. A sub-group was established to focus on IDP statistics, which we have been leading since 2016.

Presented by Norway’s representative Director Lasse Sandberg, the two core outputs of the Expert Group received widespread support from member states during the Commission’s formal session. Appreciating the complexity of the work and underlining the need for a harmonised statistical framework for refugees and IDPs as well as investment in national capacity building to support the implementation of the various recommendations, the Commission:

In addition to the 40 countries who took part in the EGRIS and the 11 that contributed through the global consultations in 2017, several country representatives took the floor to welcome the work at the Commission including: Chad, Germany, Cuba, Bangladesh, Russia, Finland, Turkey, Uganda, Azerbaijan, Latvia, Tunisia (on behalf of the Africa group), Jordan, Georgia, Colombia and Austria.

Certain elements of the work received particular support such as addressing the challenge of having competing data on forced displacement produced by various actors; focusing on the importance of coordination and the role of national statistical offices; and including the potential of different data sources and methodologies within the recommendations.

Sharing country experience through a dedicated side event

In the lead up to the formal presentation, a dedicated side event was organised to share country experiences and highlight more substantive elements of the EGRIS’ work. With over 40 country representatives taking part in the EGRIS over the last two years, alongside subject matter experts from the international community, a wealth of experience has fed into the reports.

During the side event, three country experiences were shared from the United States (Eric Jensen, Demographer), Morocco (Bouchra Bouziani, Head of Social Statistics Unit) and Colombia (Oscar Ivan Rico Valencia, Advisor, Victims’ Unit, Government of Colombia). Each one highlighting direct experiences with either refugee or IDP data, the importance of statistics on forced displacement to underpin national policy and action, and ongoing national initiatives as a result of EGRIS to improve these statistics through enhanced coordination and improvement/integration into surveys and census tools.

Chaired by Kimberly Roberson (Chief of Section, UNHCR), and with an opening statement from May-Elin Stener (Deputy Permanent Representative, ‎Permanent Mission of Norway to the United Nations), the event also highlighted the importance of this work from a humanitarian perspective. With statements also delivered by Mariana Kotzeva (Director General, Eurostat) and Lasse Sandberg, Director, Statistics Norway), the panel clearly commended the efficient and timely work of the Expert Group, welcoming it as a clear example of good practice for the statistical community and international cooperation on statistics.

Creating linkages with the New York Declaration and Global Compacts

Taking the opportunity of the High-Level panel on “Strengthening Migration Statistics: The 2030 Agenda and the New York Declaration”, the linkages between migration and forced displacement statistics were also highlighted. At this event, several speakers drew attention to the vital role of official statistics for the implementation of the Global Compact on Migration as well as the substantial and operational linkages between internal and international migration on the one hand, with statistics on refugees and IDPs on the other. Mexico, Norway, Germany and Jordan all highlighted these points in their interventions.

As UNHCR highlighted at the Statistical Commission, the EGRIS work on International Recommendations on Refugee Statistics will help move forward the Global Compact on Refugees currently under consultation between member states. Improving evidence through nationally owned statistics and strengthened socio-economic data – both key elements of EGRIS’ work – was further highlighted at the World Bank’s Fragility Forum that took place n 5-6 March 2018.

Including forcibly displaced persons in national official statistics can be the gateway to integrating them in national development plans and the Sustainable Development Goals (SDGs). With the first major step now achieved – adoption of the International Recommendations on Refugee Statistics (IRRS) and the Technical Report on Statistics on IDPs – work will now continue through the EGRIS on refining the IDP recommendations and developing practical guidance for their implementation through a compiler’s manual.