Evidence Towards a Legal Framework on IDPs: Initiating a 2nd Profiling Exercise

JIPS’ support to the Honduran Government to reach solutions for IDPs continues in 2017. Under the lead of the Interinstitutional Commission for the Protection of Persons Displaced by Violence – CIPPDV (acronym in Spanish), in collaboration with UNHCR, JIPS carried out a two-week mission to Honduras.

The mission aimed to provide technical support to the CIPPDV and partners for the planning and development of a profiling exercise of IDP populations in Honduras. The exercise’ objectives are to update the results of the 2014-15 profiling and provide additional inputs for the development of the national legal framework on IDPs, policies, programmes and projects in the country. 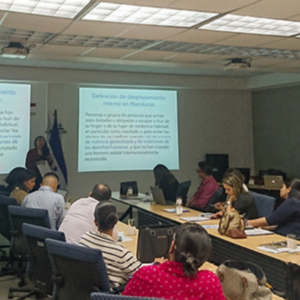 What we know from existing displacement data

Internal and international migration of the Honduran population has traditionally been associated with economic or employment factors. However, recent years have seen a growth in forced internal and external displacement caused by violence and crime in the country. The increased presence of organised crime, in its different forms (murders, kidnappings, extortion, forced recruitment and the control of territories), has forced a large number of people to leave their places of residence to protect their lives, freedom, well-being and physical safety.

As a response to internal displacement in Honduras, in 2013 the Government created the Interinstitutional Commission for the Protection of Populations Displaced by Violence (CIPPDV). In 2014, with UNHCR and JIPS’ support, this Commission led a collaborative profiling exercise on internal displacement in Honduras (check out the related profiling report in English and Spanish released in November 2015, and explore the full dataset on the DART).

The profiling provided a basic understanding of internal displacement, identifying the magnitude and trends of this phenomenon in 20 priority municipalities in the country. It also identified specific groups at risk and protection needs.

Building stronger evidence to feed into the legal framework on IDPs

Since 2015, the CIPPDV has been working on the development of a country framework to prevent internal displacement, protect and assist affected people and reach solutions, both at national and local levels. Defining the responsibilities and actions of the different institutional actors as part of this framework requires an extensive evidence-base on the situation of internally displaced populations, as well as on communities at risk of internal displacement.

The new profiling exercise aims to update the results of the 2014-15 exercise and provide additional evidence to feed into the legal framework on IDPs. During the mission, JIPS supported in-country partners to:

Under the Commission’s lead and with UNHCR’s support, JIPS facilitated three collaborative workshops with members of the Commission and extended partners, as well as bilateral meetings with international organisations and the Protection Working Groups in Tegucigalpa and San Pedro Sula.

The Technical Working Group will be a sounding board for discussions and analysis. In addition, a consultative group with enlarged participation of Government institutions will also guide the profiling process at specific stages.

Strong engagement from the Government, civil society and the international community

The profiling initiative was received with keen interest by the multiple partners in-country, and discussions with Government, the UN system, civil society organisations and community members were fruitful for the design of the initial stages of the exercise.

JIPS will continue to provide support to the partners, particularly to the design of the exercise’s qualitative component and to the overall profiling activities, and new missions are in view for 2018.