Displaced populations, whether internally displaced or refugees, are often relegated to the margins of the city. They may not have the same access to services as their non-displaced neighbours due to a variety of reasons: lacking the right documentation, discrimination, fewer social networks, or being forced to settle in already stressed and overpopulated areas, to name a few.

Designing responses to better assess the needs of these often invisible populations is precisely what the new knowledge products on urban humanitarian response were designed to do: at the occasion of this year’s Humanitarian Networks and Partnerships Week (HNPW), the Global Alliance for Urban Crises launched a series of four research papers to help advance practice of the wider humanitarian and development community. JIPS led the work on “Urban Profiling For Better Responses To Humanitarian Crises” with UN-Habitat, and also contributed substantially to the research on “Urban Displacement from Different Perspectives”. 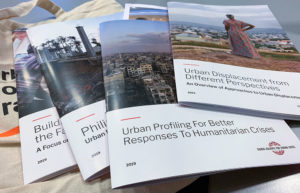 As panellists highlighted, these papers are unique in that they have been developed collaboratively and bring in the vast field experiences of the Alliance membership. Indeed, these knowledge products draw on the collective expertise of the Global Alliance Working Groups, who contributed in a number of ways:

The final results also greatly benefited from the work of consultants Dr. Pamela Sitko and Antonio Massalla, who brought in further field experience and depth to the research and content.

Bringing practice on urban crisis response to the next level

JIPS’ Coordinator Natalia Baal described these knowledge products as “key steps in driving an agenda of change” that the Global Alliance is aiming for. They set the scene for strengthening not only a shared understanding of the complexities of cities, but also enhanced collaboration between local actors – municipalities, local administrations, etc. – and humanitarian and development organisations. They also propose a systematic approach to understanding protracted urban displacement that helps to see the issue through the lens of the city.

Natalia Baal sees these resources as a critical first step towards embracing the complexity of a city.  The discipline of urban profiling highlights the need to link the analysis of a place to the analysis of the people that reside within it. But partnerships in urban areas are critical to new approaches to useful evidence to achieve an informed and joint response. She mentions further during the panel discussion:

“[With these publications,] the Global Alliance pushes the envelope to improve urban responses. Because it brings together stakeholders from different constituencies at the global level, and a major benefit of this is that they can learn about each other’s ways of working and information priorities. We hope that this translates to greater collaboration in data collection processes on the ground.”

Echoing our Coordinator’s statements, Nicolas Wit described the rouses as a “unique initiative” that could bring together actors from the local to the global level “on an operational basis.” “We have never seen this”, he emphasised. 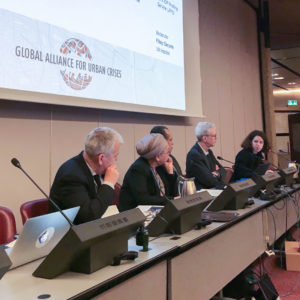 It is in this way that these resources can ultimately inform global policy and practice: they recognise that there is a variety of actors responding to crisis in cities – not just humanitarian organisations, but so many others – that can contribute in a number of ways to better understanding the needs and vulnerabilities of places and the people that reside within them, as well as improve responses to urban displacement.

As the publication “Urban Displacement from Different Perspectives” demonstrates, while actors use different approaches, they are complementary in many ways. There is no need to reinvent the wheel, but rather we should jointly build on our comparative advantages to help improve responses for the wider community.

Displacement situations are as diverse as the cities in which they take place. One of the key challenges we persistently come across in such contexts is the lack of a shared understanding of the situation and thus of effective responses to the displacement situation.

In fact, with such complex governance structures and a multitude of actors in cities, three issues are common:

These most often lead to, at best, a duplication of resources, and at worst, to responses that do more harm than good. Different partners all come away with different understandings of priorities, and end up disagreeing about what to do next.

This is where urban profiling adds value: it describes a collaborative data process that not only helps to address evidence gaps in urban crises, but also lays the foundation for joint responses in cities. Here’s the definition we have agreed upon through the Global Alliance:

“A collaborative process for collecting and analysing data on the conditions of an urban area and its neighbourhoods, the systems that organise them, and the needs, vulnerabilities and capacities of the population groups that reside in them, to inform decision-making and planning before, during or after a crisis situation. It helps to prioritise people and places most in need, taking into account both chronic and acute vulnerabilities. Ultimately, it creates a shared understanding of the situation to build the foundation for more contextualised, coordinated, complementary and holistic urban responses.”

“Urban profiling draws on the collective knowledge of national and local governments, humanitarian and development actors, built environment professionals, private sector, civil society, and communities – maximising the contributions of all.”

Urban profiling thus frames data collection in cities in crisis as a collective effort that contributes to the improved outcomes we all strive for, including for the urban displaced and displacement-affected cities.

It also offers a unique platform for bringing voices of the most vulnerable to the table to find collectively solutions. By focusing as much on the process of engaging key stakeholders as on the methodology used to collect the information, it helps to generate evidence that is not only relevant but also trusted and used.

And, speaking from our experience at JIPS, having worked in diverse urban displacement settings: bringing partners together under one collaborative process of collecting and analysing the same data is actually an incredible opportunity. It brings together local knowledge and expertise to enrich the data and improve the evidence base.

As we have seen in various exercises we have supported in diverse urban displacement contexts over the last years, genuine collaboration between partners throughout a profiling process often has a long-lasting impact. This was also underlined by numerous local authorities at UNHCR’s recent High Commissioner’s Dialogue on protection challenges, including:

While these examples face very different displacement contexts in distinct cities with their very own challenges, they all demonstrate the power of sound and agreed-upon evidence and its long-term usefulness for involved partners.

By recognising the value of leadership at local levels, the 11th High Commissioners’ Dialogue pushed forward the conversation on urban displacement, and the Global Alliance’s knowledge product mark a next step.

Where should we go from here?

We have come a long way towards improving urban responses and acknowledging that these must originate from better data and analysis. Nevertheless, as the different panellists explained at the Global Alliance launch event, we still have work to do to make this a reality.

For Natalia Baal, we need to continue working towards improving current practice to overcome urban-specific challenges to data collection processes:

“A key way forward is to build off of the work on urban profiling. This would require combining different urban disciplines and expertise to ensure that an analysis of the city can be combined with an analysis of the people that reside in it. We also need to ensure the process can lead to results that can be capitalised on by local and international urban responders in both the humanitarian and development sectors.”

JIPS will continue its engagement with data producers and decision-makers from all the Global Alliance’s constituencies to continue strengthening evidence on urban displacement and the displacement-affected cities they live in.

You can find the Global Alliance’s knowledge products on our publications page, or on the Alliance’s website. Want to share your thoughts on our contribution to these resources, or any aspect of urban work? Send us your feedback: get in touch at info@jips.org or find us on Facebook, Twitter, or LinkedIn.