Back from an Urban Profiling Mission in Libya: Combining Analysis of Populations & Urban Systems 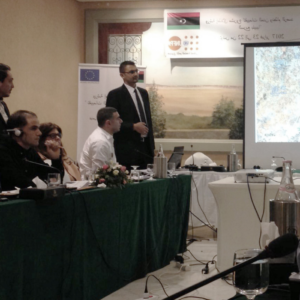 We recently undertook a mission to Tunis to discuss with Libyan authorities and various humanitarian partners the relevance and scope of an urban displacement analysis in the Libyan situation.

JIPS also took part in a city profiling workshop organised by the Libyan Ministry of Planning, UN-Habitat and UNFPA. It brought together various local and central level authorities as well as international partners to discuss the state of cities in Libya and plan for a joint city profiling approach.

The workshop launched a city profiling process originally in six urban areas in Libya. Building on the experience from the work done by UN-Habitat on crisis-affected cities in the Middle East and North Africa region (Mosul, Iraq and Tripoli, Lebanon), the profiles will aim to produce an evidence-base for local partners responding to urban recovery challenges. They furthermore intend to help authorities and humanitarian partners better understand the needs of the most vulnerable populations.

During the workshop, UNHCR and the IDP Office of the Prime Minister’s Office also expressed interest in further supporting the analysis of the situation of displaced and displacement-affected groups within the city profiles. JIPS is currently discussing with partners in Libya/Tunis to identify the next steps for the process, so watch out for more on our Libya country page! And find out more about JIPS’ work on profiling displacement situations in urban contexts.