From JIPS’ Partner Event 2017 (4/4): Changing the Narrative on Internal Displacement in Mogadishu & How the IDP Durable Solutions Initiative Came About

“In Mogadishu, the profiling provided compelling protection and solutions arguments” As Nina Schrepfer (former Protection Cluster Coordinator) laid out in the context of the panel discussion chaired by Walter Kälin on the uses of profiling data in displacement response. Profiling helped to get humanitarian, development and government actors on board and resulted in the formulation of a government-led Somali IDP Durable Solutions Initiative. (Part 4/4) 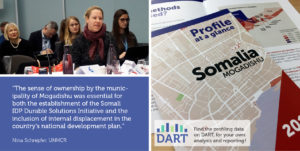 Mogadishu is the second fastest growing city worldwide and continues to grow at a high pace. The city hosts a substantial part of the population, currently estimated at 2 million out of an overall of 12 million in Somalia. It also accounts for the largest number of IDPs, estimated at almost 400,000 people out of 1.1 million internally displaced in the country. The main causes of displacement are either persistent (such as armed conflict, clan violence) or recurrent (natural disasters such as droughts and floods). As a result, a high fluidity as well as long duration of displacement characterises the situation.

Why was profiling undertaken?

Anecdotal evidence available prior to the profiling exercise indicated that IDPs were worse off than others in the city. However, various actors contested these assumptions, questioning whether IDPs could still be qualified as such after having lived for so many years in Mogadishu, whether the data was still valid, or whether IDPs suffered more from rights violations than urban poor. “In such a situation, the only thing that you can do is to create an evidence-base that empowers you with compelling arguments to deal with these push-backs”, states Nina Schrepfer.

The profiling exercise, which involved central government and regional authorities as well as humanitarian and development actors, thus provided a much needed, agreed-upon and rich evidence-base. Collected data indicated that half of IDPs lived in Mogadishu’s outskirts, of which 46% had been displaced multiple times and were therefore likely to have less coping capacities as well as higher vulnerabilities. More than a third feared eviction, which could force them to move even further out of the city. Illiteracy, which is already high in Somalia (49%), was even higher among IDPs (86%). As a consequence, their integration into the local economy was more difficult and constrained to lower-skilled sectors.

A wealth of information to inform solutions

The profiling data fundamentally changed the approach to internal displacement in Mogadishu, as Nina Schrepfer explains: “All of a sudden we were in a position to talk about local integration as a durable solution option while before everything in the dialogue was constrained to returns.” The sense of ownership by the municipality of Mogadishu, who collaborated throughout the profiling process, was essential for both the establishment of the Somali IDP Durable Solutions Initiative and the inclusion of internal displacement in the country’s national development plan.

The profiling process furthermore started a dialogue with development actors, who came to recognise displacement as an impoverishment factor as well as the importance of municipalities to implement durable solutions. Finally, it opened the door for fundraising for durable solutions across the humanitarian and development sectors, which led to the creation of a taskforce led by the Mayor of Mogadishu to develop the city’s Urban Durable Solutions Strategy.