From JIPS’ Partner Event 2017 (3/4): Capacity Sharing & Profiling in the Kurdistan Region of Iraq

At the recent panel discussion, organized by JIPS at the end of January 2017 and chaired by Walter Kälin, four panellists spoke about their experiences on how profiling data was useful in specific displacement contexts. In the case of the Kurdistan Region of Iraq, Jozef Merkx (UNHCR) explained how the area-based and comparative analysis of refugees, IDPs and host communities informed cash-based interventions in particularly vulnerable urban districts. (Part 3/4) 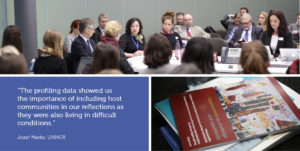 Why focus on urban displacement?

The Kurdistan Region of Iraq (KRI) experienced economic growth until 2014, when the ISIS crisis started and oil prices lowered. This had a big impact on the displacement situation, especially on displaced people in urban contexts. We knew that about 80% of displaced people were living outside of the 40 camps that we were focusing. However, we lacked solid information, not only on the needs of urban IDPs and refugees but also on those of host communities, as well as information on which urban areas were most in need of aid.

The profiling exercise that we undertook together with local authorities and technical support from JIPS came in very timely. It proved to be valuable not only in terms of the sound and agreed-upon data that it produced, but also in regards to the process and shared ownership between the three local Governorates (Erbil, Duhok and Sulaymaniyah), the UN and other organisations. The process, as it turned out, was not about ‘capacity building’ but ‘capacity sharing’ since local statistics departments were already well established and their capacities proved to be very valuable throughout the exercises.

What were the main findings?

The data revealed a precarious financial and shelter situation: IDPs and refugees lacked money to pay rent, which also affected the host community who had benefitted from renting out their rooms and apartments. Another major issue related to education, with an insufficient infrastructure and teachers’ salaries not being paid, resulting in overcrowded classrooms. The areas hosting most of the IDPs and refugees were directly affected, with host communities having to share the already scarce resources in the education sector. Thus, while IDPs had better access than the Syrian refugees, the situation was dramatic for all population groups.

Despite the difficult circumstances, the data demonstrated remarkably strong social cohesion. The Syrian refugees were accepted by the local population, perhaps because of their cultural proximity. More tensions could be observed with IDPs, mostly Arabs, but they still integrated well with the local population. With regards to the question of return and future intentions we observed differences between IDPs and refugees: IDPs were eager to go back as soon as their places of origin would be liberated, while the Syrian refugees had lost hope about return and were resolved to live in KRI and find employment.

So how useful was the data, what was the impact?

The profiling outcome was very well received by local authorities as well as by the wide range of local NGOs, not least thanks to their shared ownership of the data. Local partners, such as the GIZ, made use of the findings for their cash-based interventions in the region. Furthermore, the profiling data allowed for a more focused response to provide help to the most vulnerable geographical areas as well as most exposed population groups. Furthermore, it showed us the importance of including host communities in our reflections as they were also living in difficult conditions.