Leaving no (Refugee) Behind: The New Indicator on Refugees in the SDG Indicator Framework is a Game-Changer

For those of us working on forced displacement, it has become undeniable in recent years that any real resolution to refugee and IDP situations requires development as well as humanitarian interventions. This reality has, unfortunately, not always been without question and has had limited traction outside of the community working directly on these issues. The recent inclusion of an indicator on refugees in the indicator framework for the Sustainable Development Goals (SDGs) – the result of a few years hard work, diplomacy and determination – is therefore a huge achievement. Here is how the story came about.

Note: a shorter version of this article was first published on UNHCR’s blog on Dec 2, 2019. 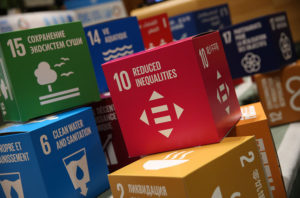 Photo by IISD/ENB | Kiara Worth

What is the relevance of the SDG indicator framework for displaced and stateless people?

The 2030 Agenda for Sustainable Development appeared tailored to advance the rights and wellbeing of some of the planet’s most vulnerable and marginalized people. Indeed, the Agenda contains a pledge that no one would be left behind, and includes specific reference to refugees, stateless and other displaced persons in a number of places.

It may then come as a surprise to learn that in the original indicator framework, designed to measure progress towards meeting the Sustainable Development Goals, there was not one indicator that even mentioned refugees or displacement. This is of critical importance, since an unintended consequence of using an indicator framework as the measurement tool is that what is outside of the framework is not measured, counted or reported on and therefore often interpreted as not relevant/compulsory to the achievement of the overarching goals. To paraphrase a cliché, in order to count you must be counted and this has proven to be particularly the case with the SDG indicator framework.

How was the indicator framework developed?

The United Nations Statistical Commission (UNSC), a functional commission of the United Nations Economic and Social Council, led the work of developing the global indicator framework. In order to do so, it created in March 2015, the Inter-agency and Expert Group on SDG Indicators (IAEG-SDG) and tasked the group with the job of developing and implementing the global indicator framework for the goals and targets of the 2030 Agenda. In contrast to the Millennium Development Goals and to ensure buy-in from member states, this is a country-led process: the group is comprised of a number of member states with rotating seats to reflect the different regions, while regional and international agencies as well as other member states and stakeholders participate as observers.

The original indicator framework was developed following the early meetings of the group in 2015 and, after consultation and refinement, presented to the Commission in March 2017 and subsequently adopted by the General Assembly in July 2017. The framework itself and regular progress reports can be easily accessed online.

What’s in the indicator framework and where is the ‘forced displacement gap’?

Over 230 indicators are included in the framework, spread out unevenly across the 17 goals and numerous targets. Every indicator is classified by a ‘tier’ based on their level of methodological development and the availability of relevant data at the global level, with tier 1 grouping indicators that have a clear methodology and on which data is available (go here for more on the classification).

Although there was agreement that the indicators should be disaggregated by characteristics such as ‘migratory status’, which could include displacement, there was no consensus on the definition of the term. Later meetings of the Expert Group on Migration Statistics agreed that this should include refugee status where appropriate (although not necessarily internally displaced persons (IDPs) or stateless). The need to disaggregate SDG indicators to include displaced populations – and the poor track record in doing so – were highlighted in this excellent report by the International Rescue Committee.

To continue this important advocacy effort, we joined the IAEG-SDGs workstream on data disaggregation and commissioned a thematic report to showcase how data disaggregation of an SDG indicator by forced displacement status could look in practice. UNHCR and JIPS submitted a recommendation to the IAEG-SDGs in 2018 identifying three key policy areas of particular relevance for forcibly displaced populations, and mapped priority indicators to these areas. Delivered on behalf of the wider Expert Group on Refugee and IDP Statistics (EGRIS), which also includes many IAEG-SDGs member states, the contribution was well received and formally included in the report to the Commission in March 2019. Next, these recommendations needed to be translated into real data and reporting practices, both by member states and custodian agencies as well as the broader statistical community.

However, whilst these are all important developments for reporting on outcomes for refugees, given all the challenges surrounding such data disaggregation in practice, clearly there was still a need for an indicator relating directly to refugees. UNHCR therefore continued its efforts to address this and ensure that refugees are included in the SDG indicator framework, beyond disaggregation.

Introducing an indicator on refugees, pushbacks and breakthroughs

It was clear that with more than 230 indicators there was no appetite to add any more indicators and it was essential to have a tier 1 indicator which would not add to the reporting burden on countries. UNHCR already collected and collated extensive data on refugees and asylum seekers in nearly every country globally. Therefore, we decided that the indicator must be based upon data which we already collected, with good availability and a clear and internationally agreed methodology.

This led to the development of the proposed indicator on refugees:

In other words, the percentage of a country’s population which is displaced abroad. We had considered reporting the population by country of asylum. However, this posed a number of questions: what is the target you are trying to achieve? Will countries be penalized for hosting more refugees? But if the target is to increase refugees, are we saying that having more refugees is good? After all, we want fewer refugees in the world, not more. We had considered a more nuanced indicator on durable solutions but the necessity to keep it “tier 1” meant this would not be possible at this stage.

Technical criteria would not be sufficient to justify adding an indicator to the many existing indicators. We also needed to make the case regarding which SDG target was not being adequately measured. Two targets emerged as the most appropriate:

After much discussion and consultation, it was decided to promote the indicator under target 16.3 since the fact that there are refugees indicates by definition the breakdown of the rule of law in the country of origin and hence the need for international protection.

The indicator was proposed informally to the IAEG-SDG towards the end of 2016. To our surprise and disappointment, reaction was swift and negative. Certain members felt that humanitarian concerns had no place in a development framework and that it would end up being a “name and shame” exercise. We took the concerns on board and tried to address them, but also enhanced our efforts to advocate for the indicator with both critics and champions.

What just happened in Addis Ababa?

In 2019, the IAEG-SDG conducted the long-awaited comprehensive review of the global indicator framework in order to submit its proposed changes to the UN Statistical Commission in March 2020. The review included proposals regarding refinements, revisions, replacements, additions and deletions from the 230 plus list of indicators, and was subject to a process of open consultations and subsequent final discussions during the 10th IAEG-SDGs meeting in Addis Ababa, in October 2019.

This was our window of opportunity to have the indicator on refugees included, and although odds were against us, we persisted by formally submitting the proposal for inclusion in the review in June 2019. And it was worth it: not only was the additional indicator put forward for the final discussion on the review at the IAEG-SDGs meeting in Addis Ababa, following a period of public consultation, but it also met with overall strong support from IAEG-SDG members. Some final questions and queries were raised, mostly pertaining to the target that the indicator should relate to, and, interestingly, this questioning came from sister agencies not from member states. A particular achievement was that one of our sharpest critics in 2016 ended up being one of our most enthusiastic champions in 2019!

Eventually, the group felt that it fitted better under Target 10.7 and it was agreed that it should be included in the framework with this amendment. Finally, after three years of hard work, an indicator on refugees was going to be in the SDG indicator framework!

Why does this matter?

Displaced and stateless people have been almost invisible in the reporting on the SDGs, which has undermined the basic premise of the 2030 Agenda and the promise to “Leave No One Behind”. The specific inclusion of an indicator relating to refugees allows those advocating for their protection to be included in the discourse on sustainable development. Preventing situations which generate forced displacement and finding durable solutions for those already displaced is now part of meeting the SDGs. It also highlights the humanitarian-development nexus, ensuring that it is front and center in sustainable development.

The momentum gained from the successful work of the EGRIS that has developed international statistical recommendations on refugees and IDPs under the auspices of UNSC, was instrumental to this achievement, in addition to the determination of UNHCR’s statistics team to advocate for the indicator on refugees among relevant stakeholders. JIPS’ contribution to the disaggregation agenda and its soft (but insistent) diplomacy also created the additional momentum needed to get over the final hurdle.

For the work on improving data and statistics on forced displacement, this is a game-changer. UNHCR is now a custodian agency for an SDG indicator and can leverage broader efforts on improving reporting on SDG progress related to refugees and asylum seekers, including facilitating access to valid information on how refugees are faring compared to other population groups and identifying gaps in terms of SDG achievements for refugees. The increased prominence given to refugee statistics reflects an increasing appreciation of existing (global and national) data gaps on forcibly displaced persons, and a broader policy recognition of the need for developmental intervention to solve refugee crises. The new SDG indicator on refugees, the recommendations coming through the EGRIS, and the recently established UNHCR-World Bank Joint Data Center on Forced Displacement are all indicators of this change in mindset and will also lead to improvements at the national level.

Beyond the indicator itself, we believe this development also opens the door to more serious conversations and action around the disaggregation of other SDG indicators by displacement status. As was highlighted by both IAEG-SDG co-chairs – Tanzania and Sweden – as well as the UNSD secretariat numerous times during the meeting in Addis Ababa, now that the work on developing the framework has come to an end, the primary work ahead of the group and its extended partner network is to focus on data disaggregation in order to live up to the normative goal of the 2030 Agenda and ensure no vulnerable groups are left behind.