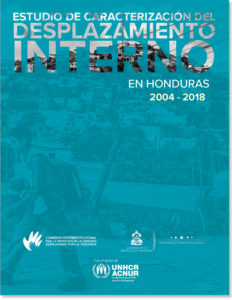 The profiling exercise provides a nationwide evidence base for a better understanding of internal displacement in Honduras, including its scale and impact. It furthermore helped strengthen the institutional and legal framework in the country to address the phenomenon and informed the design of related public policies.

It built on a previous profiling study initiated by the CIPPDV in 2014, which looked at displacement in urban areas in 20 municipalities and provided an initial estimation of the number of IDPs in Honduras as well as the causes and dynamics for displacement. The conclusions from the study as well as the recommendations from the UN Special Rapporteur on the human rights of IDPs following her visit that same year, contributed to the inclusion of internal displacement in Honduras’ new penal code and informed the decision to create the Directory for the Protection of Internally Displaced People due to Violence (DIPPDIV), attached to the SEDH.

The 2017 profiling report is available in both Spanish and English.