The fourth World Reconstruction Conference in May 2019 in Geneva reaffirmed that “the inclusion of marginalised groups […] during assessment, planning and decision-making processes” is key for long-term recovery from crisis.

Similarly, the event underlined the importance of bringing together a place-based with a people-based approach to achieve a comprehensive understanding of how displacement affects both communities and urban environments. Profiling was featured as one of the key tools for generating such an evidence base and ensuring the inclusion of displaced persons in recovery processes.

Building a sound and shared evidence base for inclusive recovery

Building on examples of profiling exercises in Mogadishu, Somalia in 2016, Thessaloniki, Greece in 2018 and ongoing work in El Fasher, Sudan, Natalia highlighted the relevance of profiling for inclusive recovery processes and shared the following recommendations:

Other panellist also highlighted the critical role of IDP participation, beyond the data/analysis process, providing key examples from a range of displacement contexts.

From Fiji, the focus was on displacement and relocations, which would fail without participation and guidance from affected communities. From Indonesia, experience was shared from the Ache recovery process, where the mantra of ‘build back better’ had to be replaced with ‘build back better and safer’, and where the inclusion of IDPs and other victims helped ensure a more sustainable and efficient recovery process. Whilst Prof Walter Kaelin shared broader reflections on the problems that arise from top-down processes driven by institutional mandates, and recommended to focus instead on area-based, bottom up processes informed by “what people need and want”. 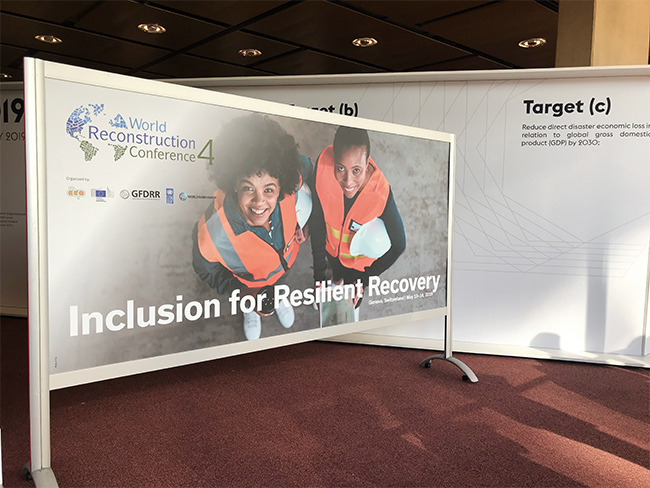 The use of urban profiling for post-conflict reconstruction in cities

Urban warfare creates significant fissures in the urban system that are difficult to restore. The resulting demographic shifts – often uncontrolled and unmanaged – frequently lead to the emergence of informal settlements and thus puts pressure on affected areas, increasing their vulnerability over time.

At the same time, conflicts in cities also undermine the strength and capacities of local governance to manage and adequately respond to the crisis situation and adjust their urban planning and housing policies. To overcome these significant challenges, participants to the session on inclusive post-conflict urban reconstruction agreed that reconstruction efforts must be centred on the needs of the affected population and cohesion between groups.

Discussants also emphasised the importance of bringing together development and humanitarian actors working in both post-disaster and post-conflict recovery contexts. They have much to learn from each other, they argued, and will blend more and more as natural disasters and conflicts overlap.

The comprehensive evidence base produced through urban profiling is unique, explains UN-Habitat, because it provides a first snapshot of the functionality of the city. It does this by analysing the impact of conflict on both the urban context and the affected population groups, including looking at e.g. the extent to which they are able to access the infrastructure and services that the city can offer.

As stated in the Global Alliance for Urban Crises’ paper on urban profiling:

Urban profiling is the collaborative process for collecting and analysing data on the conditions of an urban area and its neighbourhoods, the systems that organise them, and the needs, vulnerabilities and capacities of the population groups that reside in them, to inform decision-making and planning before, during or after a crisis situation.

In the same session Matina Halkia, Scientific/Technical Project Manager at the Joint Research Centre (JRC), also demonstrated the benefits of detailed satellite imagery for giving a first snapshot of the spatial damage after a conflict. Using the example of damage caused to informal neighbourhoods within the city of Daraa, Syria – the site of a former Palestinian refugee settlement –, she showed how conflict affected displaced populations disproportionately, against their pre-existing vulnerabilities and spatial inequalities in urban contexts.

Ms. Halkia is also a JIPS partner in the Urban Analysis for Syria project. The damage assessments conducted by the JRC are a key feature of the methodology for urban profiling of Syrian cities, accessible through the UrbAN-S web portal.

A detailed description of how this and other data collection methods can be brought together under a holistic analysis of the cities will be featured in the Urban Profiling Toolkit to be launched in July 2019.

The World Reconstruction Conference was co-organised by the African, Caribbean, and Pacific Group of States (ACP), the European Commission, the Global Facility for Disaster Reduction and Recovery (GFDRR), UNDP, UNISDR and the World Bank Group.

Want to learn more about urban profiling? Get in touch with us at info@jips.org, or find us on our pages on Facebook, LinkedIn or Twitter.